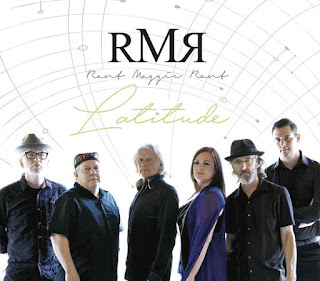 This Ontario folk ensemble might be the ultimate melting pot of musical styles, and delights in mixing elements in surprising and fun new concoctions. There's lots of trad folk, but it's turned on its head, with lots of drums and percussion, obvious jazz bass or a rock guitar, a whistle playing a blues, a bouzouki doing whatever it is bouzoukis do. The band keeps bringing in more and more instruments to the mix: fiddle, recorder, accordion, harmonica, mandolin, tabla, a shifting ensemble of core members and guests, and even they lose count; the group photos are of six main musicians, but the credits list seven.


No matter, these are all special players, giving new life and different twists to originals and classic folk covers. Opening medley Hold The Candle starts with lots of effective beats and a near-reggae bass on an Irish number, which then blows up into a fiddle/drum workout. Then they keep heading east: Mi'kmaq Enigma sees them cover two Arsenault writers from P.E.I., An Dro is a visit to Brittany, France, and then Cocktails in the Cabana finds them in Galicia, Spain, The lovely Paper Boats is perhaps the best example of their first-tier ensemble at work, starting as an acoustic guitar/percussion number, before recorder, fiddle and more join, doubling and tripling the lilting melody line, touches of Africa gliding in.


It's three-quarters instrumental, although when there are vocals, again, it's a wonderful sound, especially the crazy folk-scatting on Cocktails in the Cabana. The singers in the group are aided by guests Katherine Wheatley, and Danya Manning and Emm Gryner of Trent Severn. Perhaps the one area the group doesn't excel in is lyric writing, with The Ballad of Old Jack McGraw a bit clumsy, but A Good Western Wind is a soothing way to end, a sailor's tale done well. There's no shortage of new ideas from this forward-thinking band.
Posted by Bob Mersereau at 9:53 PM