MUSIC REVIEW OF THE DAY: THE WHO - MY GENERATION (SUPER DELUXE EDITION) 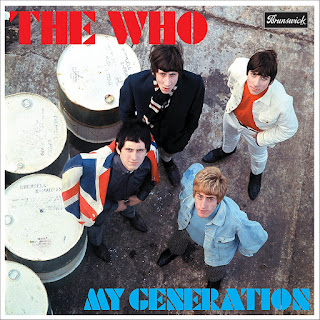 Ah, the box set. How far it has come since the first heady days of Dylan's Biograph and Eric Clapton's Crossroads. Those sets and several others changed the game for veteran artists and collector fans. Previously unreleased music was now a priority, a gold mine for everybody from Springsteen to The Beatles, and as record sales dwindled, box sets got bigger, more elaborate, good money-makers for artists and record companies at a time when there was little else to count on. Fans have proven themselves willing to part with more and more money when you added more and more unreleased material, no matter what it was. Dylan's people have made it an art form with the Bootleg Series, releasing everything from raw studio sessions to the roughest recordings of the Basement Tapes to a whopping 36-disc set of every show on tape from 1966, despite the fact that almost every one has the same exact set list. Just call it a Super Deluxe Edition, and there are fans lining up to shell out.


The latest set from The Who explores one album, the group's debut from 1965, My Generation, or The Who Sings My Generation as it was called in North America. In typical repackaging efforts of today, this 12-track album has been exploded into a five-disc package, using most of the tricks of the trade these days. We get the album twice, first in mono, then in stereo. Then there are all the associated tracks from that year that were either released as non-album singles or simply rejected at the time. Then there are alternate mixes, or different takes of songs. Finally, there's a disc of demos for some of the songs by Pete Townshend, and even some songs that never made it past the drawing board. So a 12-song album becomes a 79-track box.


Sounds cool on paper, but before reaching for that gift certificate from Amazon your Aunt Dorothy sent from Calgary, examine it closely. Discs one and two, do you care if you have the album in stereo and mono? Will you listen closely over and over pick a favourite? If you're a passionate fan, perhaps. Now to discs 3 and 4. Maybe you bought the 2002 Deluxe reissue of the album already, in which case you would already have all the b-sides and singles and out-takes, like the hit Anyway, Anyhow, Anywhere or the Motown covers Leaving Here and Heatwave. And do you care about having them in mono or stereo, or getting a variation of a cut with a more prominent french horn part, or an earlier vocal take from Roger?


I'm betting the majority of folks will now say no, and save their $142.34 for the new John Grisham thriller and Green Smoothies For Life, and such. But here's where I'll stand up proudly for these boxes, even though you do get the same songs, repackaged and repurposed, which you might already own. My reasons are thus:


1.) These sets are the new coffee table books.


It's a fabulous thing to hold. A beautiful, hard-cover book with tons of great photos, and an intelligent, informative essay over 80 pages, including notes on each track, lyrics, and special notes from Townshend on the new demos disc. As well, there are replica inserts of flyers, business cards, and posters from the time.


2.) You get to really know the album, and have a great listening experience.


I took Boxing Day to listen to this, a good investment of time given the cash investment. You pay attention, you hear the stereo/mono differences, you read the notes and find out the history of each track. It's pretty cool to hear a different take of the hit My Generation, and then an instrumental version too.


3.) The B-sides and out-takes tell a whole different story


Covers of James Brown, Garnet Mimms and Martha and the Vandellas show the group deep in their early mod phase, a hyper bar band playing soul tunes for rowdy fans, the equivalent of The Beatles at the Cavern Club. They had a whole repertoire to choose from, as well as the growing songwriting talent of Townshend.


Townshend has been wowing us for years with his demos, many of them released on his series of double albums called Scoop, and on other box sets. Now, he's ready to unleash more. There are two glorious takes on My Generation, three songs never recorded by the band, some that didn't appear for a couple of years, 11 in total, plus a note saying he's going to release more on further, upcoming volumes of Scoop. Awesome. For me, this is the best disc in the set.


There's all sorts of nitpicky, trainspotter stuff going on as well that's not worth getting into, but you can read about it, and caught up in it if you're a purist. Most big fans agree these are better stereo mixes than the ones from 2002. Many of the alternate cuts are appearing in stereo for the first time on CD here. Townshend and Daltry did some minor overdubbing of missing parts for a handful of the stereo cuts recently, always a sore point for some.


But I don't care about any of that. I love The Who, and I love holding this thing in my hands, it's beautifully made, and a great document of an artistic statement from 1965. I had a great time with this set through the day, in what has become a holiday tradition for me, the "new box set for Christmas" listening party. I'll pull it out from time to time, to check on a fact, to maybe play the full album, and definitely to play the demo disc. I may do the whole box set over another time. You can be cynical and say it's a cash grab, but I wouldn't say that, there's a ton of work that went into this, hours and hours by many people, and they are using high-quality materials in the manufacturing. As I write this, I'm staring at the ever-growing collection of these sets, including the many Dylans, a couple of Claptons, The Beach Boys' Smile and Pet Sounds sets, The Rolling Stones Abkco singles, an Al Green box made to look like a Bible, and previous Who Super Deluxe boxes on Live At Leeds and Tommy. They all make me very happy. So does My Generation. Nothing matches the thrill of a well-made box set for this music collector.
Posted by Bob Mersereau at 6:26 PM