MUSIC REVIEW OF THE DAY: DIANA HAYES/ANDY MEYERS - DEEPER INTO THE FOREST 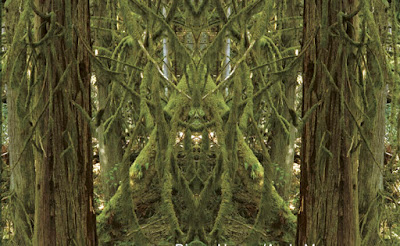 Many people in the arts have found themselves shut out of some of their regular work in the Covid reality, which has been a curse financially, but occasionally there have been a few creative blessings. Without readings, conferences and launches on the schedule, B.C. poet Diana Hayes had time to turn some of her most recent work into a different project. Teaming up with guitarist and experimenter Andy Meyers (The Scenics, "The Last Pogo"), Hayes recited a number of her poems, which were then augmented with music, voices and sound effects. It's a rewarding combination of spoken word, music and atmosphere.
Rather than simply composing music to accompany the poems, Meyers lived with the audio, thought about the words, and found sounds, natural or created, to weave in and layer. Since nature is key to Hayes' poetry, field recordings of bird calls and frog peeps appear, treated with effects. There are wordless vocals at various times, supplied by Susheela Dawne, and Hayes' own voice is sometimes echoed back, a ghostly repetition. For the most part Meyers provides calm beds for the poems, fitting as Hayes has a soothing, Hinterland Who's Who-quality of narration. But when fuller sounds appear, it makes it even more dramatic, as found on "Thirteen Ways to Free a Crow." Here the guitar is richer and louder, train-like tones appear and the poet's voice doubled, sometimes repeated. If you too have extra time in lockdown, it's a good chance to expand your listening and try something different.
Posted by Bob Mersereau at 5:56 PM