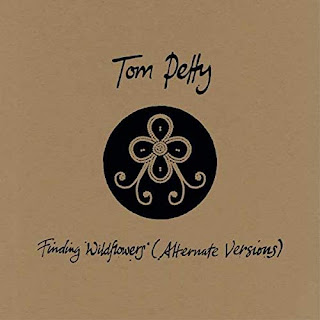 I have already waxed enthusiastically about the release last fall of the box set called Wildflowers And All The Rest, a fantastic set featuring all sorts of alternates, live cuts, demos and more from Petty's Wildflowers sessions. What I didn't mention was that there was also a Super Deluxe version with a bunch more artwork and an entire extra album of cuts not available elsewhere. It cost you a bundle more. Well, guess what? After waiting a few months to hopefully not piss off the collectors who spent that bundle more, the extra album has been released separately, meaning smarties like me and you didn't have to shell out all that extra cash.
Enough smugness, I certainly coveted that bonus disc, and now am very happy it's available on its own. It includes a further 16 cuts, alternate versions of most of the songs that made up Wildflowers, plus a couple of b-sides, and a one-off track from the sessions, "You Saw Me Comin'," that makes its debut here. What's with all the alternate versions? Well, Wildflowers took ages to make, from sessions over two years, and was originally planned as a double album. It was at a transitional time for Petty, with drummer Stan Lynch leaving, signing to a new record label, and Tom unsure if he was making a solo album or another Heartbreakers disc. Rick Rubin was producing, some session players had come in, Lynch had been invited back for awhile, and Petty was trying out his songs in various ways. So here you get the tracks sometimes in more rocking versions, others in their acoustic mode, some with different lyrics, and others with completely different moods.
In the end Petty didn't want to make a Heartbreakers album, even though all of them played on these songs, and the original release from 1994 featured a lot of takes that were more emotive than raw. Here are some of the more rockin' versions, especially on tracks featuring Lynch, and the whole Heartbreakers vibe. "Crawlin' Back To You" is faster here, and "House In The Woods" has a regrettable middle section jam inspired by Mike Campbell's recent interest in the Grateful Dead. Petty probably made the right choice on most of the tracks, even though he must have been sad not to include the Ringo Starr take of "Wildflowers." Yeah, any album that includes a song starting with "You count it in, Ringo," is got to be good. You can pick this up on CD now, on special gold vinyl, or coming soon, regular old black vinyl.
Posted by Bob Mersereau at 12:06 AM