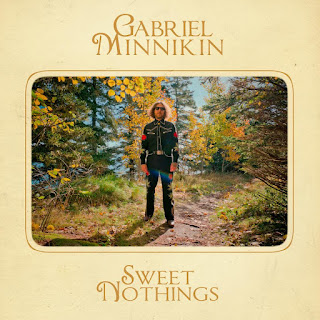 Nova Scotia stalwart Gabriel Minnikin is always a delight, a cowboy with a heart of alt-rock. While capable of acoustic, deep-thinking troubadour tunes, on his latest he lets loose in the studio with great flights of pop production, and great big songs full of instruments and singers. He blows the doors off right at cut one, "Pretty Little Ditty," which is far from little. It takes off with an explosion of horns and ooh-la-la's, a wonderfully idiosyncratic tune that references "Heart Of Gold" and Steve McQueen in the lyrics.
Next up is "The Lion & the Lyre Bird," another magic mega-production with everything including actual bells and whistles. Make that belles, as Minnikin counters his country croak with charming N.S. singers Terra Spencer, Kristin Hatt, Alana Yorke, Mel Stone, and Gabe's sister Ruth. With a nod to Stompin' Tom, the cut "C eh N eh D eh" is a tribute to our homeland, more natural pride than national, but that's the right kind of patriotism.
"The Downtrodden Jubilee" is the most adventurous cut, which is saying a lot for this wildly diverse and imaginative collection. It's dramatic and operatic at times, with a horns and wordless vocals introduction which peels away to reveal a "Day In The Life"-style verse, but then some sort of Brechtian chorus with ummphs and moans instead of lyrics. It's like Brian Wilson, Paul McCartney and Frank Zappa got together in 1968 and played a game of "beat that" in the studio.
After that palate-cleanser, Minnikin calms things down as we head to the end, getting more country as he goes. "Please Forget Me" is a barroom weeper, pedal steel and piano now dominate. And closer "Blood Harmony" is an old-school spaghetti western number, drama and veiled threats in the family, in what could be a murder ballad up in the mountains where family is everything and the police won't go. And I think I heard an oboe.
There is a lot going on, but in no way is it a challenging listen. It's actually a delight, with lots of ear candy to enjoy and fine playing to appreciate. But the deeper you listen, the more impressive the album becomes. Put on "repeat."
Posted by Bob Mersereau at 11:30 PM