MUSIC REVIEW OF THE DAY: KAT DANSER - ONE EYE OPEN 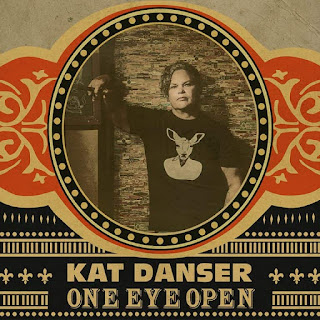 There's not too many albums that would qualify as blues with such a straight-up punk rock song as the title cut. But that's the big wide blues world for Kat Danser. She isn't confined to the bar band sound of much modern blues, nor is she confined to her hometown Edmonton sounds, pandemic or not. Danser teamed up with producer Steve Dawson in Nashville, and aces scattered around the continent for this set, recording her vocals remotely in Edmonton, with nobody in the same studio. How they pulled off all her different styles is a testament to the talent involved, and the now-familiar miracle that is Zoom.
Danser is an integrator, taking classic location sounds and smoothly blending them, while still allowing different genres to come to the fore depending on the track. "Mi Corazon," obviously Cuban and sung in Spanish, still has horns that owe as much to New Orleans. And where that pedal steel solo comes from, well, it's part of the magic. In "Lonely & The Dragon," those horns are now serving up slow-burning soul jazz lines, while Kevin McKendree (Brian Setzer, Delbert McClinton) provides a shot of vitamin B-3. And "Bring It With You When You Come" is delightfully Dixieland/Fats Waller, with Dawson sliding in some licks, while the horns go off script for a bebop moment or two. Meanwhile Danser goes from goodtime vocals on "Frenchman Street" to tough as nails on "Way I Like It Done," a different character for every different song. By the time she rages, "What the hell is going on?" in her best punk voice for "One Eye Open," it all makes sense actually.
Posted by Bob Mersereau at 6:36 PM