MUSIC REVIEW OF THE DAY: LYNZIE KENT - SOMETHING WILD 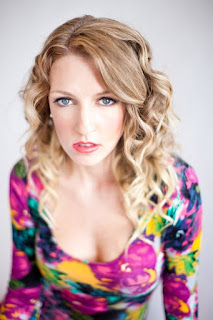 It's always great to hear a new voice (well, new to me), and a good way to start off a new year.  Ontario's Lynzie Kent has just released her disc, called Something Wild, and features a parcel of excellent singing on what we used to call rock songs.  Produced by Jann Arden vet and Juno winner Russell Broom, the disc has an in-your-face boldness, without any trickery, just strong tunes with good stories, and a singer who makes you want to hear them.  If anything, it's a throwback to a day when you had to put some thought into the composition if you wanted to make a decent disc, instead of the Black-Eyed Peas view of the world, keeping it simple and stupid.

I take back my original statement, I think I actually did see Kent before, because she used to sing with God Made Me Funky in 2006-7, and I think that's right about when I saw them.  But since then she's been slyly building up the fans by doing what she does best, singing, although instead of constant touring, she's been constantly updating her YouTube channel, adding cover after cover of current hits, just aided by acoustic guitar buddy Rich G.  The result has been that millions of hits later, fans know what she can do with Kings of Leon and Adele tunes, but hopefully they'll stick around for her own.

I think, in the post-Adele world, people will be looking for actual singers who put some emotion into it, and Kent's a good bet.  Not only can she soar with power in a couple of registers, she can front tracks with big drums, bells and whistles.  There's certainly a touch of 90's and some 80's too, as if to emphasize this isn't about hip-hop, dance, nu-country or singer-songwriter, it's a pop-rock album.  While most of the songs have an edge, Kent isn't above having fun too, with lead single (available as a video) Whoop Dee Doo, a Girl-Group/New Wave bouncy, winning track.  Anyway, I can't tell you how much I wish radio would go this way, Kent's way, for 2012, because this is the kind of Top 40 I wish we had more of.
Posted by Bob Mersereau at 2:43 PM