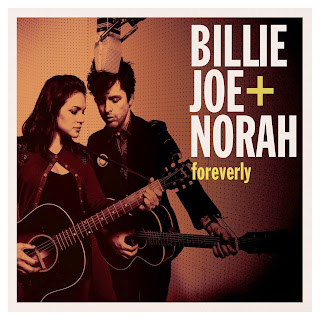 An interesting duo for sure; Jones has certainly showed an interest in roots-country before, but Billie Joe Armstrong?  The Green Day guy has been wandering from punk, but this is a whole other highway.  In the end, it doesn't matter who they are, it's whether it's any good.

What this album isn't also matters, because it isn't the Everly Brothers you know from the golden hits collection.  No Wake up Little Susie, no Crying In The Rain.  Instead the inspiration is the brothers' 1958 album, Songs Our Daddy Taught Us, which was made up of old weepers and folk songs, hill music and murder ballads.  Don and Phil laid into these songs with their trademark harmonies with love and respect for the traditions they had been raised on.

Of course there have been plenty of roots revival albums made, and lots of traditional folk ones, by modern upstarts.  But it is quite something that Armstrong and Jones have decided to focus on this distinct part of the Everly Brothers career.  You'd better be good harmonizers if you do, and they do it very, very well.  We knew she could, but Armstrong again is the surprise here, as he turns in not just tuneful vocals, but a pretty fine impersonation of an Everly.  Only on the ancient Barbara Allen does he decide to sing in his nasally punk voice, to the detriment of the piece.  It's almost like they decided to do at least a couple of tracks not quite so Everly, so they wouldn't be accused of taking all the songs verbatim.  Meh, they shouldn't have bothered.

It really is quite refreshing to hear them copy and cover the style.  By the time I'm Here to Get My Baby Out Of Jail comes along, at cut 8, sung almost solo by Jones, you've pretty much forgotten who these modern stars are, or what year it is, and have sunk back into the pleasure of timeless music and vocals.
Posted by Bob Mersereau at 4:52 PM