MUSIC REVIEW OF THE DAY: THE SOJOURNERS - SING AND NEVER GET TIRED 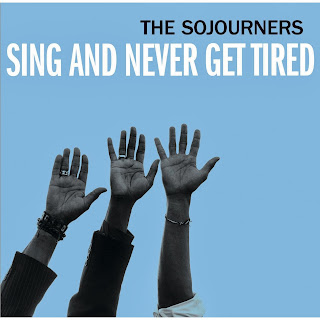 More sanctified blues from Vancouver's excellent vocal trio, gospel singers teamed up with fine musicians to bring back the fine tradition of electrified salvation.  All three came from the States, fully versed in the traditional church harmony singing, and the importance it played in social movements, so this is the real deal.  With album #3, there's a no shortage of fine material, including some clever secular covers that fit nicely in the spiritual realm.

This time out, they're working with a tight blues combo led by producer Pigat, who adds strong guitar lines, and if there's a fourth voice on the disc, it's Canadian harp favourite Steve Marriner from MonkeyJunk, adding lots of piping fills between the harmonies.  It's perhaps a tougher sound than their previous work, putting them more in line with Staples Singers material, but certainly at no loss to their finesse and I appreciate the added punch.


The group does draw on The Staples' catalogue twice in the 12 cuts, including the lovely opener Don't Knock.  They prove their gospel worth on a beautiful version of Ezekiel, the high harmonies thrilling.  There's a grand original from Vancouver bluesman Brandon Isaak, his Dressed For Heaven, which could easily be a vintage number from the days of the great quartet singers.  They also turn their hand to some rock covers, including a lovely slow version of Dylan's I Shall Be Released, and a take on Buffalo Springfield's For What It's Worth works as a message song, and even has a gospel connotation, in a pinch.  It's all high-quality material, but as always with the band, the harmonies thrill from start to finish.
Posted by Bob Mersereau at 9:39 PM