MUSIC REVIEW OF THE DAY: DOWNCHILD - CAN YOU HEAR THE MUSIC 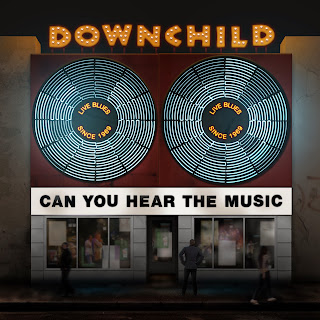 The venerable institution which is Downchild is still, and forever, Canada's reigning blues band.  And in case you wonder if the old dog has any new tricks, the group's 17th album is full of originals, moving from style to style.  Mr. Downchild himself, Donnie Walsh, sends in the lion's share, and keeps things moving and grooving, which is what the band has always done.  Kicking things off with a horns and piano jump blues, the title cut is straight out of the 40's ballrooms, and matches anything Roomful Of Blues is doing.  Singer Chuck Jackson gets soulful for One In A Million, with some gospel harmonies and Walsh's sizzling Southern slide work.

There's also a dignified maturity to the band.  They aren't writing or bragging like they're teenagers, and they aren't covering the same old classics half or more of the other bands are.  Downchild is well-entrenched, and that means confidence do to what THEY do, and sing their songs.  Bass player Gary Kendall came up with the number that fits perfectly, called Worn In.  It's the middle-aged blues:  "I got some snow up on the roof, but there's a fire deep inside/This old boy's got low mileage so come on baby, take a ride."

Kudos for the best Canadian album cover this year, too.  It depicts the famous Sam The Record Man sign from Yonge St. in Toronto, now the source of controversy in the city, as it hasn't yet been restored and displayed by current owners Ryerson U., as promised.  Downchild is Canadian music.
Posted by Bob Mersereau at 9:08 PM