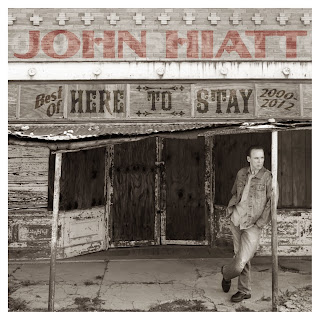 John Hiatt has been a huge influence on roots music fans and songwriters for years now, but he's best-loved for his pair of late 80's albums, Bring The Family and Slow Turning.  After decades of pounding away at the star factory on major labels, the new millenium saw him move to the independent circle, signing with venerable folk company Vanguard.  2000's Crossing Muddy Waters saw him turn from the rock combo even, dropping drums and electric guitar for a stripped-down, largely acoustic effort.  I thought he was going folk full-time, and was a bit concerned by this, as the dude can rock righteously.  It turned out to be a side-step, and he soon returned to the full band, even bringing back slide wizard Sonny Landreth, the swampy fixture of his sometimes band The Goners.  There was life, and this best-of proves it well.

Since many have neglected him, they should know Hiatt has never neglected his craft and drive.  For all those who just know Have A Little Faith In Me, this set is a great place to reconnect, as it finely cherry-picks rockers and a couple of ballads from his eight albums in this period.  Master Of Disaster is classic Hiatt, with rich rhymes and a dark, comic take on rockers aging less than gracefully.  What Kind of Man, from The Open Road, is nasty country, the kind of stuff the Stones were doing with Tumbling Dice, another mean character that might have been Hiatt at one point in his life:  "I cheated on my love, I cheated on my taxes/Burned bridges, ground axes."  Blues Can't Even Find Me, from his most recent disc, Mystic Pinball, is about being down and feeling nothing, and nobody can describe that kind of lonesome like Hiatt.

Look, I'm as guilty as everyone else, I didn't even get the last two albums, but with handy reminder, I'll remedy that soon.  There's no drop in quality from his heyday, and his only sin is consistency, as in consistently excellent.
Posted by Bob Mersereau at 6:32 PM