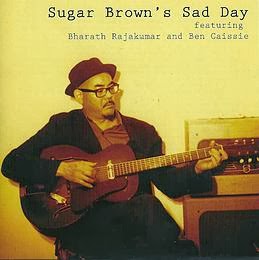 Is there any more of an unlikely blues player than Sugar Brown?  Sure, he has the blues name (and he earned it), but his real one is Ken Chester Kawashima, the son of a Japanese father and Korean mother, who was born in Ohio, schooled in Chicago, and now in Toronto.  Schooled in both ways; he was going to university by day, and hitting Chicago blues clubs at night, soaking up the influences and playing with local luminaries.  Torn two ways, he then went on to get a Ph.D. in Asian studies, living in Tokyo and NYC, and now teaches at U of T.  But he's also just made the rawest, most legit blues album of the year.

Steeped in the gritty, authentic sounds picked up in Chicago, Brown turned to Montreal harp player and studio owner Bharath Rajkumar, along with drummer Ben Caissie, and recorded the album live off the floor, into a mono tape machine.  This primitive set-up amounted to a haphazard mix, off-mic vocals, plenty of over-modulation, and in other words, just what the first electric blues sounded like.  Brown is a growler, sounds like he's 60 and a keen smoker, and would win any bar fight with a broken bottle.  This album isn't about the hot new blues sound, it's about raw, dirty, direct, simple.

The influences are the right ones; opening instrumental Fishman's Blues, an Elmore James number, here gets a taste of Freddie King's Hideaway in Brown's guitar line.  Before The Law, the first of several Brown-written numbers, has Bo Diddley all over it, right down to the maracas.  If you want old, there's folk blues in the traditional John Henry, and a sleazy take on Muddy's Rollin' and Tumblin'.  If you want new and different, he's probably the only artist to ever cover The Velvet Underground's Run, Run, Run as a blues number (which it is, if you listen close).

Brown's own songs are highlighted by some stirring, emotional numbers about his father's passing.  Grim Reaper, Sad Day, and Two O'Clock all reference it, and all sound like those mournful numbers that formed the saddest of all blues songs.  Sugar Brown knows the blues, is the blues.  He's the 2013 winner of the Toronto Blues Society's Talent Search, and Lord help me if this isn't up for a bucket of Maple Blues Awards next time.
Posted by Bob Mersereau at 11:44 AM