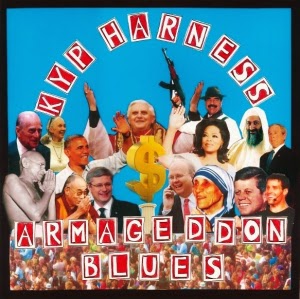 
Wanting to keep the finger-pointing going, Harness also tackles a couple of major crimes in Ontario history involving disgraceful justice. The Black Donnellys isn't a new story to songwriters, with both Steve Earle and Gene MacLellan tackling it in the past, but Harness does it almost as bleakly as Nick Cave. That's safe subject matter, over a hundred years old, but not so Ipperwash and the death of Dudley George. Clearly on the side of the First Nations protesters, Harness condemns the politicians who sent the riot police in to break up a peaceful protest, using transcripts from OPP radios that night. In an album that's filled with anger and the most heinous crimes perpetrated on a global scale, it's the most powerful story.
Posted by Bob Mersereau at 4:05 PM