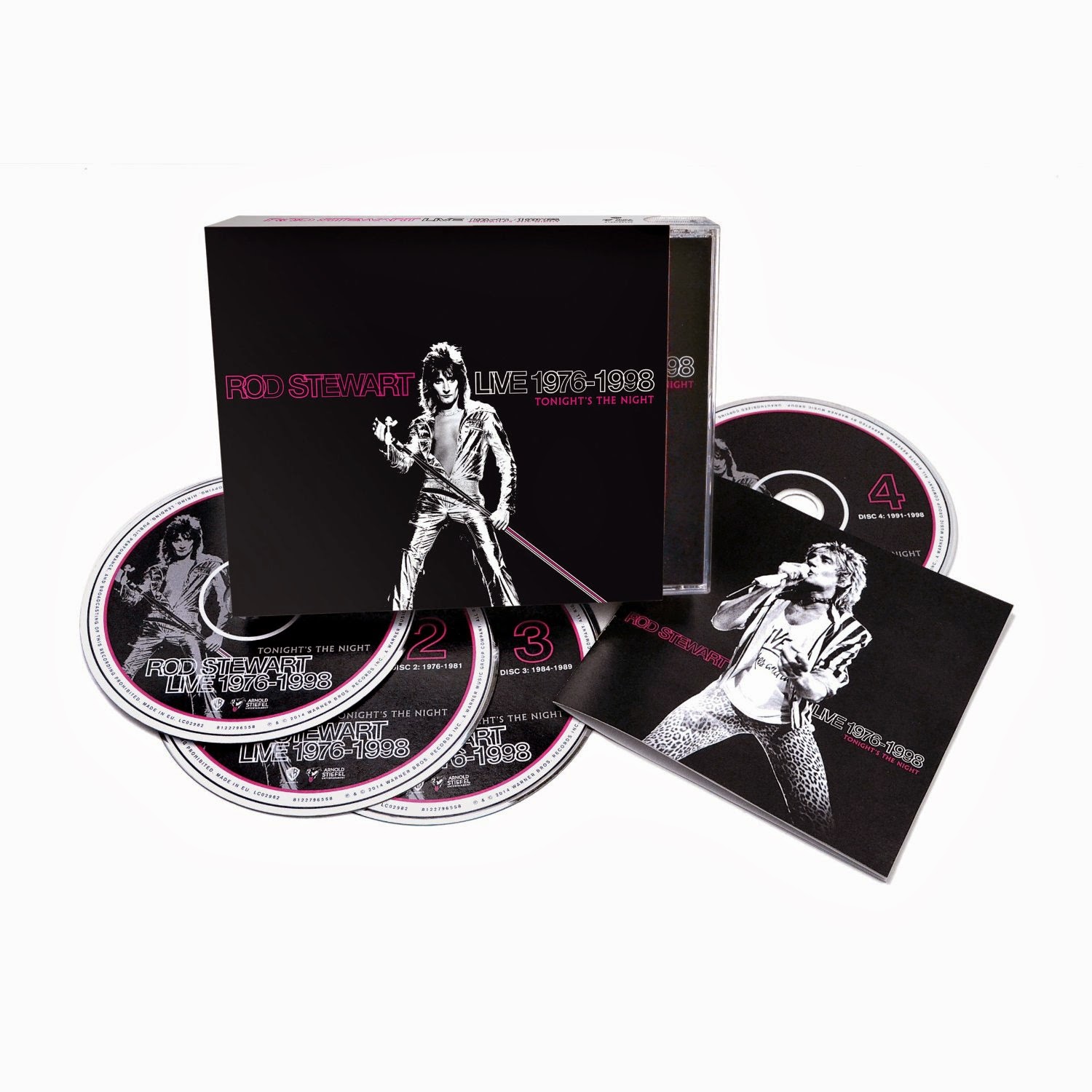 This is a new thing, a brand-new four-disc boxed set, but issued right away in budget configuration.  Usually these sets by major artists (no snickering about Rod, please) come with all the bells and whistles first time on the racks, with the books and scholarly essays and impeccably-sourced photos and such.  The artist has spent months listening to every concert tape, and gets insanely picky about the sound, as CSNY are doing right now as we (still) wait for the much-promised 1974 "Doom Tour" box.  Not our Rod though, and I wonder if he's even heard any of this.  Not that its bad, it's far from that, it's just...  well, a box on a budget.  It has the skimpiest booklet, with just the bare credits, a couple of photos and that's it, four discs in the smallest jewel case possible.

Now the good news; it's very listenable, even during the direst 1980's times, and answers the important question of, Where was the great singer hiding all those years?  As his albums got worse, his live show kept things up.  Now, part of that is thanks to some judicious choices on the compilers' part.  It doesn't dwell on the hit singles of those times, instead pulling out lots of classic cover versions (Rod may be the best Otis Redding impersonator around), and trotting out lots of Maggie May-era tracks and Faces numbers.  He even jumps back into the blues at times, for numbers such as I Just Want To Make Love To You (Willie Dixon), proving he still has the old touch he began with, back when he was performing with the likes of Long John Baldry.

Disc one is all from 1976, while he was still pretty cool, and although Tonight's The Night was the hit, and featured here, the bulk of his show was made of high quality stuff from solo and Faces albums, such as You Wear It Well, Hendrix's Angel and Ms. Maggie.  The second disc is 76 - 81, and although the rot is starting with weaker numbers like Passion, his crack band more than makes up for it with a quality Stay With Me, and Twistin' The Night Away/Every Picture Tells A Story.  Problems spring up on disc three, as we hit the mid-80's, and some significant suckage (and synth) comes in.  Tonight I'm Yours, Infatuation, and some piece of crap called Bad For You are included, the latter actually marred by some kind of stage hum, a very audible bad chord or the like.  Here's where this budget thing comes in, it's the kind of audio error that would normally be either cleaned up with technology or omitted, and it's shameful to hear it on a major label release.

But disc four brings us back to better quality in the 90's, the synth if it is there sounding much better, thanks to improved machinery and tastes of this decade.  Again, the compilers get their game back on, grabbing cuts such as Mandolin Wind, Cut Across Shorty and Reason To Believe over more embarrassing Rod fair.  Hey, I also seem to have developed a tolerance for Baby Jane, no doubt a side effect of this year's flu vaccine.  I'd say a good two-thirds of this box is quite worthy, which is damn good picking for post 1975 Rod Stewart, and at 58 tracks and a $40 price tag, it's a good deal.
Posted by Bob Mersereau at 9:24 PM