MUSIC REVIEW OF THE DAY: DRIVE BY TRUCKERS - ENGLISH OCEANS 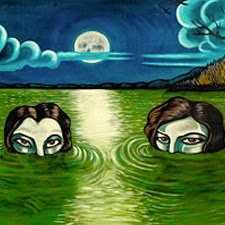 The Truckers have been shedding members in the last few years, but manage not only to hang on, but keep on the right path.  The latest major split was with bassist and singer Shona Tucker, still holding on after her one-time husband, Jason Isbell left a few years before.  Losing two major writer/performers would kill most groups, but really it just moves the band back to the beginnings, as founders Patterson Hood and Mike Cooley continue to anchor the group.  And for the new album, Cooley in particular has stepped up to the plate, contributing half the songs, a big burst in his productivity.

Having two writer-singers is important to the band, giving them lots of variety.  Cooley's Jagger-like drawl fits the tight southern boogie well, with its guitar-drenched grooves recalling the Stones' Brown Sugar period.  Hood continues to act as the social conscious voice, and he has some pretty intense political statements to make on this one.  The Part Of Him is directly aimed at the power players and backroom boys who stop at nothing to elect questionable candidates.  From buying votes to hanging chads, Hood has had enough of these types, wrecking democracy:  "He was an absolute piece of shit, to tell the truth.," and "He was a piece of work, more or less a total jerk, his own mama called him an S.O.B."  Tell it like it is, Patterson.

This back and forth system really works well, as we rock along to Cooley and get inspired stories from Hood.  Twelve albums in, and numerous line-up changes, the Truckers continue to put out first-class albums, rejuvenating their sound with each new period in their career.
Posted by Bob Mersereau at 10:14 PM