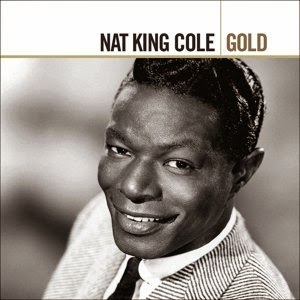 Old King Cole was a mellow old soul. I have no idea if anyone has coined that before, but I'll claim it. Who knows where his career would have taken him had he not died prematurely (lung cancer in 1965, age 43). He was not only a dominate hit maker, but also a TV and movie star, the first black performer with his own network show. A savvy businessman, he no doubt would have changed with the times, as he had earlier, moving from a more jazz-oriented piano player to smooth vocalist. Several of his biggest hits came in the years before his death, including Ramblin' Rose, Those Lazy, Hazy, Crazy Days Of Summer and L-O-V-E.


The two-horse town I grew up in only had room for two radio stations as well, and Lord knows I wouldn't listen to CBC, so the lone private station (where I eventually ended up employed) had to make do. As the only game in town playing music, the programmers didn't want to offend the advertisers and housewives it imagined at home during the day, so most pop music was banned, at least until after supper, when the kids got the radio. So I heard a playlist made up of older, safe numbers, including the ones above, already a few years old but rotated like current hits. They weren't pre-rock and roll, but could have been. Cole wasn't for kids, this was cool, sophisticated and slick, catchy too. It felt like cosmopolitan music, and certainly for much hipper parents than mine. Heck, in those lazy, crazy summer days where he was, they had soda (we called it pop here), pretzels (don't think I'd ever seen one), and beer! None of that in my Baptist household.


All that is to point out that amid all the, for lack of a better term, crap that filled the adult-oriented daytime radio of my youth, Cole stood out as high quality. Sure, it was smooth, but that didn't hide his blues chops as a singer. His version of Stardust here is every bit as soulful as Willie Nelson's, and his St. Louis Blues stands alongside Bessie Smith's, even in the completely different approach.


The usual Gold format is followed here, a double-disc crammed with 40 songs. I would have liked some of his King Cole Trio tracks from the early, jazz piano days, but we do get all the evergreen hits, including Unforgettable, Nature Boy, Mona Lisa and Too Young. Perhaps his biggest hit though, after all these years, is his unbeatable version of the The Christmas Song, found here as the final track, which alone will ensure his name will be heard for generations to come.
Posted by Bob Mersereau at 9:24 PM