MUSIC REVIEW OF THE DAY: THE DRAMATICS - GREATEST SLOW JAMS 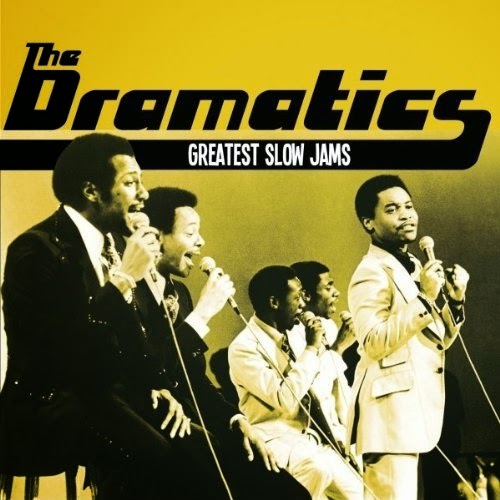 One of the great things about the famous Stax/Volt labels being revived a couple of years back has been the reissue campaign.  Yes, they've been hitting the glory days of the likes of Otis Redding, The Staple Singers, Booker T. and the MG's, but also they've gone into the vaults for some unreleased works, and have been re-evaluating the work of some of the latter-day artists.  As the company was collapsing in the mid-70's, even proving hitmakers like The Dramatics couldn't get on the charts because the records weren't getting to the public.  The group had two huge hits, both Top Ten and million-sellers, Whatcha See Is Whatcha Get and In The Rain, but never again hit the Top 40.  That's despite a succession of worthy singles, and no drop in quality for several years.  After the Stax/Volt demise, the group switched to ABC Records, but the career damage was done.

This set isn't a greatest hits in the normal sense, but rather a collection of their best soul ballads, for the U.S. radio format called slow jams.  Now, that just happened to be the group's specialty, so many of the chart hits are here, including the gorgeous In The Rain, but since many of them only made the lower reaches of the Top 100, they'll be unfamiliar to all but the biggest fans.  The excellent Toast To The Fool, the follow-up to In The Rain, certainly deserved a better fate, a great example of their multiple voices style.  And I Panicked is another should-have-been, a gritty vocal from Ron Banks over sleek soul.  There are several album cuts as well, including 1972's Fall In Love, Lady Love, a huge production with strings, horns, percussion and harmonies, proof of how deep the quality was for this band.  I could have used a little variety rather than all slow stuff, but each cut has beautiful moments.
Posted by Bob Mersereau at 11:47 AM