MUSIC REVIEW OF THE DAY: JONATHAN ESTABROOKS - THESE MILES 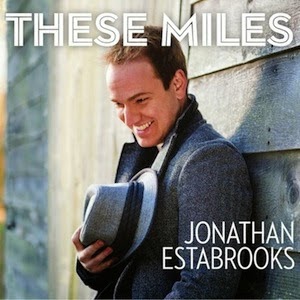 Vocal fans will be excited by this debut from Estabrooks, a Juilliard-trained baritone from Ottawa. Already well-traveled and acclaimed from Carnegie Hall to opera stages, he's veering off the well-worn path for classical vocalists. Using Kickstarter and social media, he's established a fan base, and now delivers with a mix of pop, musicals, and a little bit of opera.


Using rich orchestral arrangements, Estabrooks performs a few surprises, including Neil Diamond's Play Me. The blend of acoustic guitar and strings are a lovely reminder of 70's pop balladry, his vocals rich and poor, but wisely his full power is held in check, as he could easily overwhelm the delicacy of the number. Another strong choice follows, the gentle Kathy's Song from Simon and Garfunkel, performed with even more restraint, the higher key bringing out a sweeter vocal.


There are a couple of over-heard selections that feel a bit ho-hum, the ubiquitous Time After Time, Always On My Mind and yet another version of Aznavour's She, but those are redeemed by a fun Any Place I Hang My Hat Is Home by Mercer/Arlen. For that taste of his more classical material, there's a duet with Jonathan Antoine, the British teen vocal sensation, Por Una Cabeza. Estabrooks can sing anything wonderfully, and seems to have the personality and drive to connect with a broad audience. It's all class, and an uplifting and soothing listen.
Posted by Bob Mersereau at 2:48 PM