MUSIC REVIEW OF THE DAY: ADRIAN SUTHERLAND - WHEN THE MAGIC HITS 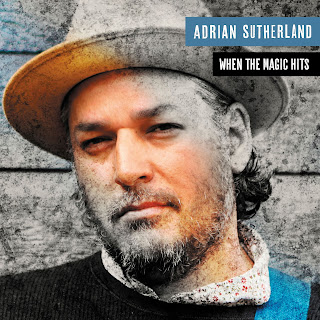 From Attawapiskat on James Bay, this is roots-rocker Sutherland's first solo album after four with the band Midnight Shine. Smooth-voiced and sensitive, he's tapped into a prevailing mood that many will recognize and understand. Between Covid and all the strident voices of politics, the sad realities of colonial past, it's been a rough couple of years on everyone's psyche. Sutherland was left with one big question: Where's all the love?
The album, Sutherland says, is about all the personal thoughts he hasn't been able to put down in song before. Some are bigger and universal, like dealing with all the chaos out there right now, while others dig up some of his demons from the past. Mostly though, it's a call for us to help each other, walk with each other. Lord knows the guy would have lots to rail about, from his work with young people in the North, watching all the shortages that affect the communities so much, from clean water to mental health care. But instead he uses his voice and words to reach out and connect, by sharing his fears and feelings.
In "Scared," which is actually an upbeat tune with a fine groove, he lets us see inside with words straight from the heart: "I think of all the words that people say/Why we gotta hate so much today?/And it hurts me." The song "Walk With Me," written with Serena Ryder, is about Reconciliation, not why it's important but how to do it, letting ourselves see through other's eyes.
The album features nine cuts that range from tender ballads with strings to atmospheric productions to poppy roots, all delivered with an emotional honesty. In addition to Ryder, other names present include co-writers Jay Semko from The Northern Pikes, Colin Cripps of Blue Rodeo and Chris Gormley of The Trews. Production is handled mostly by the always-remarkable Colin Linden, with Tim Vesely (Rheostatics) handling two cuts. It's the sound of a very good heart.
Posted by Bob Mersereau at 10:13 PM