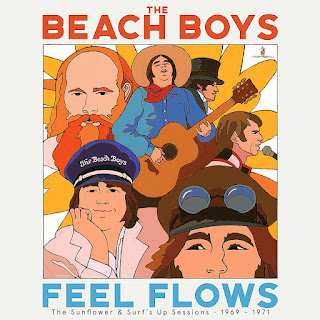 Truth. I've been trying to get people to listen to this period of The Beach Boys' music since I was in high school. And that was indeed a very, very long time ago. I could never understand why it wasn't considered brilliant then, and I'd like to say to all those doubters over the years that indeed I feel vindicated in my life-long obsession and devotion. This boxed set is being hailed as containing the group's long-lost masterpieces, a must for anyone who takes them more seriously than "Barbara Ann" or "Surfin' U.S.A."
Well, if these albums were lost, they were hiding in plain sight. Both 1970's Sunflower and 1971's Surf's Up, the records from that period, have been easily available and reissued several ways since the '80's. There's simply never been a concerted push for them until now. That's been handled now by expanding the 1969-1971 time period into a five-disc collection, filled with outtakes, different versions, live cuts, works-in-progress and the ever-popular a cappella sections where you can hear the glorious vocals.
It's a pretty good story too. With leader Brian Wilson going through more and more withdrawal due to his mental health, the band decided to build a recording studio in his house, in order to entice him downstairs. That worked on some days, but not always. Or he'd start a production, then leave it for others to finish. Meanwhile the rest of the group had to step up in production and songwriting, as their resident genius could no longer work at his usual, stunning pace. And surprise surprise, the rest of them showed they all had the skills needed, if not at Brian levels, then combined, they could come close.
Not that Wilson was totally missing. In fact some of his very best songs come from this period, just not in the same numbers. "'til I Die" from Surf's Up is the calm opposite of "Good Vibrations," an impossibly beautiful melody and vocal arrangement with a bittersweet look at mortality: "I'm a leaf on a windy day/pretty soon I'll be blown away."  Whatever thoughts were going through Brian's head, this was "In My Room" all grown up. "This Whole World" is another masterpiece, the song shifting moods and keys several times in two minutes, the vocal arrangement breathtaking. There was no-one else in the world who could conceive of that track, and since then, people have learned to copy the style but not truly create something so fresh and fierce.
It's notable that Carl Wilson co-produced that cut with Brian, because he had to take the reins most of the time for the next while. The baby of the family had by then learned much of the studio language and could get the needed work from the other members and the session pros who usually looked to Brian. The rest describe this period as among the best for the group, since they were all excited to contribute, bringing in new songs and getting to add their own ideas, solo or collaboratively. Bruce Johnston, who had joined in '66, surprised all with touching piano numbers "Deirdre" and "Disney Girls." Al Jardine, the resident folkie, brought some quirky numbers and a big interest in hippie environmentalism ("Don't Go Near The Water," "Lookin' At Tomorrow") which sounds completely cool in these days of global warming concerns. Even the much-despised Mike Love was hard at work co-writing lyrics with all of them, including the should-have-been-huge singled "Add Some Music," now rightfully regarded as a classic.
But it was Dennis Wilson who surprised the most with his songs and production. Previously the hot drummer and not much more, he had learned piano in the late '60's and was composing beautiful, dark, atmospheric love songs that were becoming an important part of the early '70's band. Working often with Beach Boys sideman Darryl Dragon (aka the Captain of Captain & Tennille), intense songs such as "Forever" were initially meant for solo records, but got drafted into band tracks in Brian's absence.
Not that they lacked material. As the boxed set shows, there were more than a dozen other tracks complete or near that were rejected, set aside, used as b-sides or saved for later. Some have surfaced over time ("Susie Cincinnati," "San Miguel"), others presented in other boxed sets, but several more are here for the first time, other than notorious bootleg and YouTube clips. Some rank among their best, including Love's "Big Sur," later reshaped as part of a medley on 1973's Holland, but here in its original time signature, a head-scratching drop from Surf's Up. Dennis's European-only solo single "Sound Of Free/Lady" could have easily made Sunflower. However it was Brian who proved the most troublesome writer as his mental state grew worse. Mostly he was childish, silly and inappropriate. "Good Time" was a fun track but nobody wants to hear lyrics like "My girlfriend Penny, she's kind of skinny, and so she needs her falsies on." Makes me cringe every time.
So lots to love here, a couple of things to scratch your head over, but if you don't have these albums you'll probably be shocked they aren't better known. Surf's Up did okay but Sunflower was a complete bomb, at least in North America. England hailed it as the group's best after Pet Sounds, and it probably is. Even the repetitive takes on discs three and four that have the instrumental or a cappella sections are well worth hearing, as the productions are so rich and complicated. The book essay is a bit myth-making, as it wasn't quite the joyous time they make it sound. And while this creative period lasted a couple more years, America discovered nostalgia after that thanks to American Graffiti and Happy Days, and the public demanded they return to their '60's surfin' and cars songs. Unlike The Beatles, you have to pick and choose Beach Boys albums carefully, but this is absolutely one to enjoy.
Posted by Bob Mersereau at 4:32 PM