MUSIC REVIEW OF THE DAY: CHARLIE A'COURT & WITCHITAW - WHEN COUNTRY GETS THE BLUES 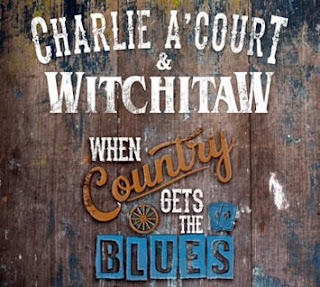 Here's a project delayed for a year by Covid but no less potent, and ready to roll. A'Court is the fiery blues and soul guitar slinger originally from Truro, N.S., and Witchitaw is the outlaw country band from the nearby Annapolis Valley. They crossed paths enough at awards shows that Witchitaw singer Jason Spinney realized A'Court would sound great singing their style of country, and the band figured they wouldn't mind getting bluesy too. They approached A'Court with the plan, and he loved the idea too.
The first gigs included a showcase at the annual, huge Cavendish Beach Music Festival in 2019, and was a hit with the crowd. They planned to tour the show last year, but then, you know, pandemic. So now they're ready to get going, and with a bonus. The Cavendish show was recorded, and is coming out in connection with the fall tour. The ten-track set gives a full picture of what the collaboration offers, with vocals shared by A'Court and the band, some originals, a couple of covers that fit the sound, and everything a bit bluesy, a bit country-rock.
It's an interesting mix. When A'Court isn't singing, he's playing some wicked lead guitar on the more countrified tracks. There's no hint of conflict between the two genres, A'Court happy to twang, and the Witchitaw troupe smooth in the groove. You can hear that best in the Creedence hit "Down On The Corner," when they hit the centre of that swamp classic. Meanwhile Witchaw makes sure there's a local flavour in there as well, with "East Coast Country Side Roads."
Witchaw and A'Court are finally able to hit the road, with a series of Maritime dates. Catch them at:
Posted by Bob Mersereau at 6:26 PM