MUSIC REVIEW OF THE DAY: CAROLINE MARIE BROOKS - EVERYTHING AT THE SAME TIME 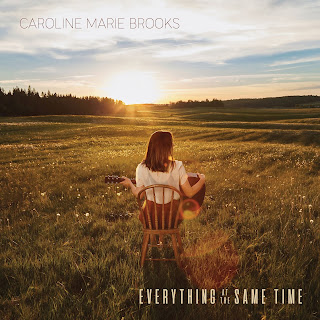 "Look how beautiful it is outside but I'm stuck on the inside," is not just a pandemic reference. Like many of us, Caroline Marie Brooks found herself in deep reflection during the past year and a half of isolation. That line in "Birdsong" refers to being stuck emotionally, thoughts and feelings caging us up as much as Covid. Brooks, one of the three members of folk favourites Good Lovelies, found herself flowing with new material but nowhere to share it, kept off the road and away from her partners. The perfect time then, for a first solo album.
Moving from one-third responsibility to handling all the leads herself might have been daunting, but she makes it sound effortless. Brooks has a tremendously pleasing tone, gentle and soothing, easy-going, like a mandolin. It's perfect combined with stringed instruments, and co-producer Jim Bryson underscores her good and lovely vocals rather than overwhelming with anything near loud. Mostly its things like baritone and tenor guitars, a dobro and a tiple, a symphony of soft. There's even an instrumental, two guitars, just Brooks and her dad, called appropriately "Song For Fred."
She had no shortage of inspiration even under lockdown. It was time to take stock of a few memories, a few current realities, and to not forget singing and playing for the simple pleasure of it. Family and children feature prominently, Brooks smack in the middle of life, young people to care for, watch grow older, and parents and partners fitting in there too. It's past, present and future all there under one family, great memories, a few fears, some melancholy and lots of contemplation. But don't forget the joy. A poignant and pleasing last note is a surprising cover of an old Roger Miller song taken from the soundtrack to the '70's Disney movie Robin Hood, "Oo-De-Lally." On the surface you could let this album wash over you as a pleasing and uplifting set, but it doesn't take long for the lyrical weight to sink in.
Posted by Bob Mersereau at 10:09 AM