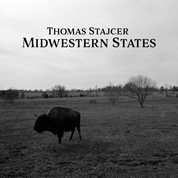 The in-house engineer at Joel Plaskett's New Scotland Yard studio in Dartmouth continues with his hardcore country alternate career, serving up real-deal honky tonk and badass lyrics. In his "Heading To The Bar To Do Bad Again," his protagonist has no illusions about his evening's fate: "I'm willing to make poor decisions/I'm fine with the consequences/I've got a thirst to quench." In "Who Will Listen To Country Music When Trucks Drive Themselves" he asks the question nobody's thought about yet, but the real story here is the scariness of technology vs. culture, and what should be left behind in the race for progress.
But Stajcer is not all booze and country philosophy, not by a long shot. The twang leads the way, but also conceals a deep literary bent, and a lot of the soul searching we go through trying to find the right path.. The title cut has him reading Hemingway, musing on the historic opening of the continent in the 19th century, and longing for a far-off love, a lot to pack into  three verses. That track is about as powerful Americana as I've heard, full of heartland soul and a melange of various roots music sounds. As for an overall style, Stajcer and Co. seem like eleven different bands over the eleven cuts, from fast and furious to heartache, Western swing to Spaghetti Western to Bluegrass to Appalachian folk. Smart, strong, catchy.
Posted by Bob Mersereau at 4:48 PM