MUSIC REVIEW OF THE DAY: CARLA OLSON - HAVE HARMONY, WILL TRAVEL 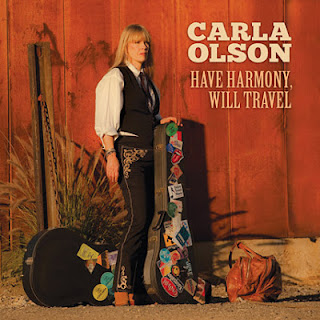 It's been awhile since we've heard a new disc from Olson, but she's quietly carved out an interesting roots-rock career, as a performer and producer.  Along the way, she's teamed up with ex-Stone Mick Taylor, ex-Byrd Gene Clark, ex-Mannfred Mann Paul Jones, and proved a strong collaborator.  So this album of duets and partnerships is an inspired choice.  Olson has found a dozen lesser-known but excellent tunes, and teamed up with lesser-known but excellent co-vocalists to do them.

Producing herself with top-notch players such as Cindy Cashdollar (Ryan Adams, Dylan), Barry Goldberg (Super Session, umm, Dylan), Clem Burke (Blondie), and others, the disc has a robust, vintage sound, a tribute to the songs and the eras represented here.  We go from 50's rock to 60's pop to classic country to garage to modern folk, with the musicians showing their love and having what sounds like a blast.  Check out Del Shannon's grand Keep Searchin' (We'll Follow The Sun), a track that shows glows with 1964 energy, as Peter Case and Olson do it Beatles-style, Goldberg drops in a classic Hammond B-3 line, and you wonder where this song has been all your life.  Olson brings back her old partner Clark's Byrds favourite She Don't Care About Time, with Buffalo Springfield's Richie Furay handling lead, and Olson giving it a sweet harmony line.

There isn't a weak track here, even when the surprises come out.  The Jersey sound gets feted with a Little Steven cut, All I Needed Was You, with Del-Lord Scott Kempner giving it the garage growl.  Perhaps the most left-field choice is Moby Grape's 8:05, again a Peter Case duet, this time finding them in slowed down and sweetly harmonizing.  And answering the trivia question, Whatever happened to Juice Newton?, she shows up here for two numbers, trading leads with Olson to great effect on Radney Foster's You Can Come Cryin' To Me.  In a music world that seeks out and celebrates stars, Olson shows it serves the song much better to put together a great team.
Posted by Bob Mersereau at 7:34 PM