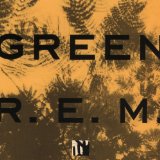 The on-going, chronological reissues of the R.E.M. catalogue continue, and the good news is that even a switch of record labels hasn't changed the program.  For 1988's Green, the band jumped ship from indie status (I.R.S.) to major label Warner. That means the reissues also switch, from the EMI banner to Warner, but Green continues the same exact format.  The original album is on one CD, there's a bonus disc #2, a huge poster, postcards of the band, and an over-sized box to hold it all.  So for those collecting them all, this fits nicely alongside.


At the time, the cool kids warned that moving to a major would be the demise of the group, going commercial and all that.  But it really had been a steady progress for the group, from minor-key mumblers to crisp and clear hit-makers.  Their previous disc, Document, had delivered The One I Love, and It's The End Of The World As We Know It, the crowds were bigger with each tour, and people could actually sing along.


Green did shake up things even more, with some deceptively poppy numbers, notably Stand, as light-hearted as they'd ever been.  The addition of mandolin on several tracks lightened things further, although lyrically for the most part the topics were still tough and more direct.  Orange Crush and World Leader Pretend saw Stipe taking on the big boys, the ones who send kids to war.


But even with weighty topics, Green didn't blast.  That came on the road, where these songs got the full treatment, especially from Peter Buck.  Often these reissues include a live concert as a bonus, which is nice, but I'll listen once and file it.  This period set is R.E.M. at its peak though, playing to big crowds and inspired by it.  They turn out the Green material with an intensity missing on the album.  The light stuff gets dealt with off the top, which turns out to be a fun way to start a show:  Stand, into The One I Love.  But then comes Turn You Inside-Out, now menacing and powerful.  Although it would be their next album, 1991's Out Of Time that took them to the top, Green, especially live, may be the best representation of the band.
Posted by Bob Mersereau at 9:25 AM