MUSIC REVIEW OF THE DAY: BUFFY SAINTE-MARIE - POWER IN THE BLOOD 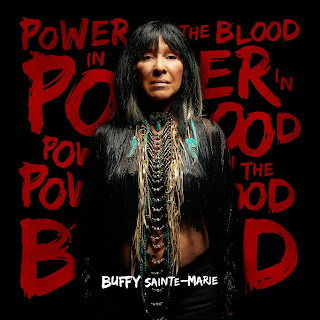 Sainte-Marie has recorded sporadically over the past two decades, each time reminding us of her songwriting power. But the albums have never fit in, either with current or classic sounds. She's never tried to go back to earlier, acoustic work; and always been keen on incorporating new sounds into her sound, synth and samples into powwow rock. Despite the importance of the music (and her lyrics never fail to make it important), the right blend has not been there.


Until this one. With three producers involved on the different cuts, it comes together as a seamless effort. There are songs that rock, some with a roots side, chants here and there, and very satisfying grooves. In a word, it's uplifting. And she's included some of the sharpest lyrics she's written, naming names and occupations, bankers and GMO producers especially.


Another of the strengths comes in her song choices. She has remade several older songs, going back to her first album (It's My Way), and some from the '70's. The beautiful Orion was an instrumental originally written by her late husband, the illustrious producer-arranger Jack Nitzsche (Neil Young, Phil Spector), and she's now added lovely, star-themed words. Another smart move is finding inspiration in other songs she admires, and making new versions. There's a re-writing of the song Power In The Blood by Alabama 3, fans of hers and vice-versa, now with a pesticide and GMO warning. She also takes the old UB40 anti-apartheid song Sing Your Own Song, and creates powwow reggae.


Inspirational, varied, commanding, valuable. It's a powerful album, and totally enchanting too, and there are very few of those.
Posted by Bob Mersereau at 2:17 PM