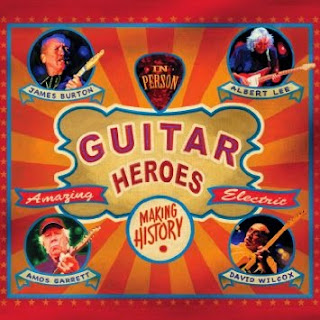 Well, you have to give it to Vancouver Island musician and festival director Doug Cox.  He had an idea, a brilliant one, and he pulled it off.  For the July 2013 Vancouver Island MusicFest, Cox invited four of the best-ever guitar slingers around.  And in each case, their chosen axe is the iconic Telecaster guitar.

Although they are all masters, one stands out and has long held the nickname Master of the Telecaster.  The great James Burton has been wowing them since the '50's, no one can match his pedigree, and few can come close to his talent.  He started with Ricky Nelson, led Elvis Presley's band, Gram Parsons' too, played with Elvis Costello, Joni Mitchell, Roy Orbison, on and on.

The rest are from the next generation but all are dream-team players.  Albert Lee is the British-born player in love with country.  He replaced Burton in Emmy Lou Harris's Hot Band, led the Everly Brothers band, toured for five years with Clapton, won a Grammy and most other guitar awards.

Canada has its own Tele royalty, and a pair of our own joined the quartet.  Amos Garrett will forever be known for the killer solo on Maria Muldaur's Midnight At The Oasis, was a founding member of Ian and Sylvia's late '60's group Great Speckled Bird and a Juno-winning roots and blues player as a front man.  David Wilcox may be best known for his hit singles and albums such as Breakfast At The Circus and Layin' Pipe, but his guitar heroics go back even further, one of the great blues players and personalities in the country.

These things can be a mess, of course.  They are usually under-rehearsed, half-hearted, more spectacle than finesse.  What works so well here is that none of these folks is a show-off by nature.  They may be entertainers, and enjoy what they are doing, but the real thrill for them is playing with other like-minded folks.  It would have been nice to get a DVD with the players' comments on the event recorded, but you can't have everything.

What is greatly appreciated is a list of who is doing which solo, so you can follow along, tell your Burton from your Lee.  By the third or fourth song, you probably won't need it, they each have such individual styles.  And if you don't recognize Burton's work on Suzie Q, as he replays his original role on the Dale Hawkins hit, then you need to spend some more time YouTube'ing these dudes.  Hearing Lee gleefully sing Country Boy, the number he wrote for his old British band Head, Hands & Feet, and later made a hit by Ricky Scaggs is a joy.  Garrett's version of the instrumental classic Sleep Walk by Santo & Johnny is perfect, his string-bending style unsurpassed.  Wilcox is all bluesy fun on You're The One.  Heroes indeed.
Posted by Bob Mersereau at 11:39 AM