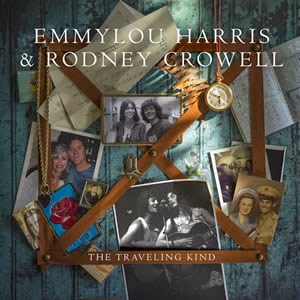 The old friends first teamed up in 2013 for Old Yellow Moon, which won them a Grammy award. Both immediately said it was just the first album, more would happen soon, and this one is just as welcome.


Harris and Crowell go back to the '70's, when producer Brian Ahern was asked to help make her first album. He'd been given a demo tape of Crowell's songs for Anne Murray to hear, but recognized them as better stuff for his new artist. Harris recorded two on her album, and Crowell became her duet partner in the Hot Band. They always promised each other they'd get back together to record more some day, and finally realized they'd better get to it.


The Old Yellow Moon album was done pretty fast, and featured covers, some old Crowell numbers and easy stuff for them to get done. This time, they wanted to make sure it wasn't OYM part two, so both came armed with new compositions. And it's a better album for it, better than its predecessor too. For the first time, the pair even wrote some together. Yup, nobody's phoning it in, this is a partnership that they take seriously. They're on the road for the rest of the year as well, so this looks to be their main job for some time.


Several of the new songs feature the all-too-human touches both often use in their songs. The title cut is a biography of sorts, folks that live on the road and have to satisfy that itch. La danse de la joie is set in New Orleans, a favourite town for both, and features an older couple still very lively. For a couple of 60-something singers still doing great work, the point isn't lost.


Elsewhere, a couple of re-makes do make the set list, but these are special. No Memories Hangin' Round was written by Crowell and originally a hit for his ex-wife Rosanne Cash, singing with Bobby Bare. The new duet version here is simply better. Another knock-out is a cover of Lucinda Williams' I Just Want To See You So Bad, always a great tune. What seemed like a nice present two years ago is now a commitment.
Posted by Bob Mersereau at 9:18 PM