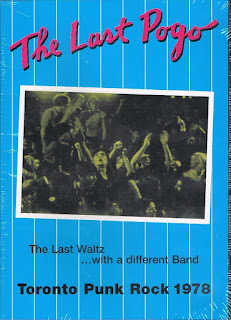 It's a strange reality where the biggest stars of a music scene weren't the bands, or even the fans. In Toronto's original punk scene, the biggest players were The Two Garys. Gary Topp and Gary Cormier didn't perform the music, they presented it, loving the bands and finding places to present it. First they brought The Ramones to the city, a cultural lightning bolt similar to the first time the Sex Pistols played Manchester. Then they found a spot willing to put on nightly shows, The Horseshoe Tavern on Queen St. West, hardly the trendy street then it would become. While they booked little-known bands they loved, such as The Police, The B-52's and Talking Heads, they also provided one of the few spaces for the up-and-coming groups of the home scene.


While they are only talking heads in a pair of DVD documentaries covering this pivotal era for Canadian music, The Garys truly did open the doors for a huge change in the sound and culture of downtown Toronto, something that would soon be spread across the country by the media based in the city. Filmmaker Colin Brunton had the bright idea to film the last-ever punk concert produced by The Garys at The Horseshoe in 1978. Called The Last Pogo, it's become a legendary night over the years, thanks to the minor chaos (shut down by the police because of overcrowding) and major line-up of first generation punk.


The original film is less than a half-hour, but opens the window on a punk night in Toronto the Good. Far less famous than London and New York's scene, there were still some high-quality bands (Teenage Head, The Viletones), and fascinating could-have beens (The Scenics, The Ugly). With just one song per group, and few audience shots, we don't get the whole picture, but this was pretty much a on-the-fly effort, and there are strong visuals of most of the groups, and we're lucky to have this piece of history.


The legacy of that night comes to fruition nearly forty years later, with the colossal documentary The Last Pogo Jumps Again. This time, Brunton and co-director Kire Paputts spent seven years making the ultimate look at the entire scene of punk Toronto from 1976 - 1978, with side trips to Hamilton and London, ON. Now we get it all, over three hours and tons of footage and fun. More well-known names come into the scene, including The Diodes and The Demics, crazy characters, sad ones, violent ones, wild ones.


The film makes its case, that the Toronto scene has been woefully under-appreciated. Teenage Head especially are one of the best bands the country has ever produced. But it succeeds even more as a look at a cultural community, and how a small group of people influenced art, society, a city and a country. The Garys, other members of the arts world, the fans, and the musicians believed strongly in something, and now history shows how right they were.
Posted by Bob Mersereau at 5:42 PM