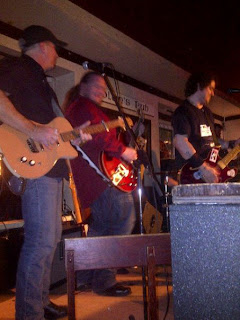 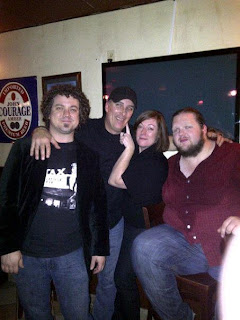 It was a full-blown party at Dolan's Pub in Fredericton, NB Wednesday night, to celebrate and send-off local blues favourite Ross Neilsen.  He's heading to Memphis at the end of January to compete in the International Blues Challenge.  That's the biggest blues gathering and competition in the world.

Neilsen was chosen to represent the Maritimes, by winning at the Harvest Jazz and Blues Festival last September.  It's his second time at the event, having previously gone with his band, The Sufferin' Bastards.  This time, he's competing as a solo artist.  He follows in the footsteps of Theresa Malenfant, Garrett Mason, Keith Hallett, and Matt Andersen, who actually won the competition, the first Canadian to do so.

Dolan's officially holds 240 people, and those tickets sold out well before.  Judging from the calls, people coming to the door, and Kijiji pleas, it could have been double or triple the crowd.  Each year, Harvest holds a fundraiser to pay for the trip.  Neilsen upped the ante by announcing that special guests would also perform.  He came through on that promise in a big way.  After an opening solo set, he brought on long-time drummer Karl Gans, and brand-new bass player Will Pacey.  Pacey looks like he may be filling the slot permanantly, after the recent dissolution of the Sufferin' Bastards line-up.

The fireworks really started when the next two guests jumped on stage.  Neilsen's old friends Thom Swift and Matt Andersen grabbed their guitars and let loose on a long set.  it was a three-guitar attack, with each trading solos, and Neilsen and Andersen handling vocals.  Swift was happy to handle slide duties.  The crowd loved seeing the three amigos, a rare night they were all back in their old stomping grounds.  The respect and friendship they share was obvious.  Andersen especially seemed to enjoy the night, getting to wail on electric, head back and long hair flowing.  That's when you know he's letting loose.  Of course, he'd just returned from Toronto, where he'd walked away with three Maple Blues Awards.  With all three together, it was an exceptional celebration of New Brunswick-born music.
Posted by Bob Mersereau at 9:29 PM