MUSIC REVIEW OF THE DAY: BIDINIBAND - IN THE ROCK HALL 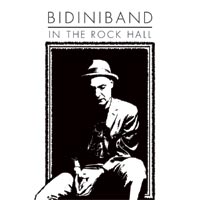 Fearless leader (more or less) of Rheostatics, or at least the company spokesperson, this is Dave Bidini's second outing with his new outfit, and shows he's moving along quite nicely.  He gave good songwriter on the first one, The Land Is Wild, coming up with solid tales of Canadiana, pornography and tragic hockey players.  This one is more of a rock band album, although fused throughout with Bidini's own literate and articulate observations.  Plus, the Smurfs show up.

Drummer and secret weapon to both Rheostatics and Ron Sexsmith, Don Kerr, handles the production again, and this time he gets to go crazy on the classic pop and rock sounds, plus join the quartet in some serious volume-dealing.  Given Bidini's breadth of vision, this means we get a bit of 60's (Hey Paul And Donna), an entire homage to the most annoying decade (The Best Thing About The 80's Was You), and some  straight-ahead Middle-Eastern power chords (I Wanna Go To Yemen).  The entire quartet, with Paul Linklater on guitar (the Paul of Paul And Donna) and Doug Friesen on bass, really get to explode and work things out over the course of the album.  That explains why, at a recent solo acoustic gig, Bidini stuck to older stuff, saying the new songs didn't lend themselves to folk music.

On my first run-through of In The Rock Hall, I got caught up trying to follow the lyrics, my usual way.  And I got mighty confused, trying to figure out what the hell he was on about at first, missing out on the excitement of the songs themselves.  I guess I was expecting a disc full of tales like The Land Is Wild, Bidini's powerful telling of the Bryan Fogarty story.  But this ain't that album, and the words are doing a different job here.  Well, several different jobs.  Eunoia  is experimental poetry, where the words can only have one vowel.  Bidini's partial to U, which means we get lines such as "hung stud lustful sluts such fun".  Actually it is a bunch of fun, even at 10 minutes, as the group rattles off a whole bunch of different parts, creating a sort of Abbey Road side 2 medley of alliteration.    Popcorn makes little conventional sense either, but is a joy as Bidini strings together pop culture cliches, including time-worn rock lyrics, quoting Stones, Elton, and The Who.  I have no idea why he or anyone else would want to go to Yemen, and I had to tell myself to stop wondering about it and just rock.

The one easily-followed narrative is the closing, and title cut, and it's special for a few reasons.  It's taken from a poem by the late Paul Quarrington, written after he did indeed visit the Rock and Roll Hall Of Fame in Cleveland.  Quarrington was a dear friend of Bidini's, a fellow musician, and his literary mentor.  They met when Bidini asked him if he could borrow the title Whale Music from Quarrington's book for a Rheostatics album, and that turned into Quarrington asking the band if they'd do music for the film of his book.  When Quarrington passed away, Bidini turned the words into a performance piece, and its a musical observation that might have come from Frank Zappa's pen had he survived to see it  ("In the Rock Hall, they got your loin cloth worn by old Johnny Winter").

What I love best about this disc is the non-stop creative energy, the sheer fun of creating with music and words, the energy and intelligence.  Over his three-decade career as a musician, author, and journalist, Bidini has been restless in his pursuit of creativity, refusing to tone down his ideas in order to grab a bigger (or any) share of the marketplace.  And if it takes me two or three listens to figure it out each time, that's exactly what I'm going to do, because that's when the rewards start pouring in.  Gimme some popcorn.
Posted by Bob Mersereau at 7:25 PM