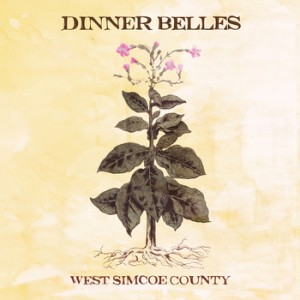 I didn't do a Top Ten of 2011 for the year-end.  I gave up on them a few years back, as I've found that as soon as I would make them, I would start doubting my choices, and by the next day I'd come up with some I'd forgotten.  Then, inevitably, I'd hear something I hadn't heard before (you can't hear everything as a reviewer), and wish I had placed that in my list.  Also, I  was tired of being mocked and admonished for my choices, especially by certain U2 hater.  I won't tell you who, but his initials are John Poirier.

If I had made a top ten list, I can assure you this album would have been on it, and perhaps even top it.  As I've told to ad nauseum, I love my yearly pilgrimage to the Hamilton Music Awards, and as I prepared for the trip this past November, my friends in the know told me I'd love this group, who had been nominated for awards for their debut.  I made a mental note to see them play as well, as they were part of the festival programming.

Not only did the live up to the advance billing, they blew me away.  Dinner Belles are a group of seven musical pals from the area who play in other outfits, but came together for this project out of a shared love of what I'll call alt-country for lack of a better term.  It's a bit old-time, some good Gram-and-Emmy Lou, and lots of The Band and the Grateful Dead in there as well.  The big group sound is easy-going acoustics with drums, plus ample use of banjo, mandolin, pedal steel and plenty of keyboards, great piano and organ.  The focus is on the combined singing talents of Brad Germain and Terra Lightfoot.  Germain does quite a U-turn from his previous gigs in the long-running Hamilton rockers The Marble Index, and the Euro-dancey Spirits.  Lightfoot is closer to this music in her own new solo career, but also branches out on her own.  However they got here, who cares, they're doing a great job with this stuff.

While there are solo vocals around the disc, it's when the two sing together (quite often here) that the record shines the most.  Relaxed and pure, their voices intertwine so readily, you'd think they were doing this since childhood.  Although these are harmonies, it's more like co-lead vocals.  A great example, and my favourite song here, is Runnin' To Ravenna, which starts off with the two of them together, a great banjo driving the tune, and some beautiful pedal steel.  Local pal Bob Egan plays that throughout the album, guesting from his Blue Rodeo gig.  Props to all the musicians in fact, and a shout-out to Greg Brisco on organ and piano, keyboard player of the year at the Hamilton Music Awards.

When she does solo, it quickly becomes obvious Lightfoot is one of the best new voices around, lots of power in a great lower register, who also soars wonderfully to hit the higher stuff.  Homewrecking Girl is a standout here, Lightfoot shamelessly playing the title role, defiant but sad.

Having seen them live, I can tell you the band knows how to deliver the stuff too, all strong and relaxed stage performers.  Again, another great band from the criminally-ignored Hamilton music scene.
Posted by Bob Mersereau at 7:48 PM