MUSIC REVIEW OF THE DAY - BUDDY HOLLY: LISTEN TO ME (DVD) 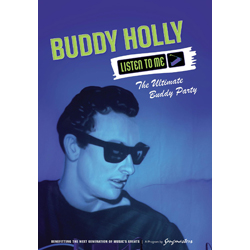 Last fall a charity tribute album, Listen To Me, was released to coincide with the 75th birthday of Buddy Holly.  Endorsed by the Holly folks, and benefiting music education programs, it featured established and current stars including Chris Isaak, Patrick Stump of Fall Out Boy, The Fray, Jeff Lynne, Ringo, Linda Ronstadt and Brian Wilson.  Also on Holly's birthday came this star-studded tribute concert, featuring many of the same artists, which has also been showing as a PBS special since December.  The DVD version is the same show, adding  a couple of bonus performances, video from making-of sessions, and a mini-documentary on the whole project.

I wasn't a huge fan of the CD, but the TV show is much better.  Other than Austin City Limits, PBS can be hit-or-miss with music, and I had a vision of one of those dreadful 50's shows they do featuring old doo-wop bands sporting one original member.  Thankfully, this is a much better project.  The stage and theatre is great, allowing for excellent angles of both the performers and audience.  This is especially nice when we get shots of Holly's widow, the famous Maria Elena, bopping it up at her table with Phil Everly, having a great time.  It's shot really well, the audio is bright and very well recorded and mixed, and the lively pace keeps you glued to the hour-long show.

For the most part the performances are top drawer, with Stevie Nicks still belting them out on Not Fade Away and Its So Easy, Raul Malo handling the tender True Love Ways, and Boz Scaggs adding some blues grit to Maybe Baby.  An all-star session band features Waddy Wachtel on guitar, Leland Sklar on bass and Russ Kunkel on drums, and it's all lead by famed record producer Peter Asher, who helmed the tribute album and the concert, plus appears on stage singing back-up (he was in Peter and Gordon, remember).  The biggest highlights are Graham Nash's passionate Raining In My Heart, Lyle Lovett's Well All Right, and guitar giant James Burton's playing on I'm Looking For Someone To Love.  Asher and co-host Isaak do a fine job too, not too much, not too maudlin or hokey, it's lighthearted and reverential at the same time.

There are the usual problems with such shows;  a few too many times a singer's eyes stray to the Teleprompter, sometimes the band settles for safety over risk, and there's some annoying editing of speeches to get the show down to TV length.  The taped celebrity tributes from Keith Richards, Ringo, Jackson Browne and Wilson are not necessary and mess up the concert feel.  There are a couple of lame performances too, most notably Patrick Stump's Oh, Boy which saw him way out of his league vocally, even though he did fine on Everyday.  And Asher's daughter Victoria and the other guy from her band Cobra Starship are silly trying to camp it up during Peggy Sue, but we know how she got the gig.

Paul Anka's speech is interesting, as he sounds humbled and still slightly shocked that he "traveled the world" with Holly, and sat in the studio with him while he recorded Anka's It Doesn't Matter Anymore.  He even does a fine version of it, although he does unintentionally provide the funniest moment on the disc when he tells the audience to "please acknowledge the talents of that cat right there", during a nice pedal steel solo by backing band member Doug Livingston.  That's how it's done in Vegas, baby.

It's certainly worth checking this show out on PBS, and if you want superior sound, the bonus features and a strong overall program, the DVD is a good bet too.
Posted by Bob Mersereau at 9:50 AM