MUSIC REVIEW OF THE DAY: EDGAR BREAU - PATCHES OF BLUE 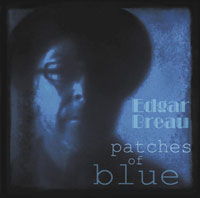 One of the great surprises when I wrote the book The Top 100 Canadian Albums in 2007 was the appearance of the band Simply Saucers, and their album Cyborgs Revisited.  The 70's group from Hamilton hadn't even released that work during their initial existance;  instead, it was a cult phenomenon, a product of super fans and super sleuthing, tapes rediscovered and a whole new generation of alternative fans discovering the work, and declaring it a major find, filling in the blank spots between Velvets, art rock, proto-punk and prog.  All of a sudden the group had a following, a documentary crew on their trail, reunion shows, new music and more notoriety than they'd ever enjoyed before, with major praise coming from leading mags all over the globe.

This left leader Edgar Breau in a dilemma.  A reluctant participant in the music world since the '70's split of the group, when he did play and record, it was acoustic music, far more folk than any of the above genres.  He'd also abandoned even that for long periods, working with wood rather than playing with it.  But he gamely put the band back together, and that inevitably sparked the other side of his muse as well.

That takes us to this long-in-the-making project, as Breau takes another trip in the less noisy and spacey world.  While there are lots of acoustic sounds about, you could never pigeonhole Patches Of Blue into one easy slot in the iTunes store.  There's blues, ballads, folk, a little funky-dance stuff, you name it, he'll try it.  Breau is a chameleon, who goes where the lyrics take him, and if he writes a line like "She says my sweet darling, I wanna have your baby,", well he's going to turn that puppy onto a disco beat.  Of course, that all fits into the outsider vibe the album carries.  Breau's whimsical side sees him la-la-la his way through a dandelion kingdom riding on a donkey, child-like and innocent, except for that well-traveled raspiness in his vocals.  Girl On A Carousel sees him step back to latin-tinged 60's breeziness, something from a Parisienne new wave film perhaps, Lee Hazlewood taking Astrud Gilberto out for a date.  Open Road is a soulful, bouncy, full band production, one of several that features gorgeous, full vocals from accomplished session singer Colina Phillips, really a co-singer here and on others.  The contrasting vocal quality is one of the joys of the album, Dylan vs. Baez if you will.

The back-and-forth is another strength for the disc, with sparse acoustic numbers following big bright ones.  It's on these quieter ones where Breau's lyrical skills become more apparent, with familiar blues themes of lovers and trains and travel getting new twists, with words such as esplanade and expeditiously flowing at you, in a British, poetic ambiance.  And then, there's "It'll give you satisfaction when your baby shakes some action."

This type of unique bard-like character usually does pop up from England, be it Andy Partridge or Robyn Hitchcock, people with a flair for language and a broad range of musical interests.  Breau might be able to make some Dickensonian comparisons to his east end Hamilton roots, but I think its more the case of the strangest career in Canadian music continuing to give us great surprises.
Posted by Bob Mersereau at 6:37 PM