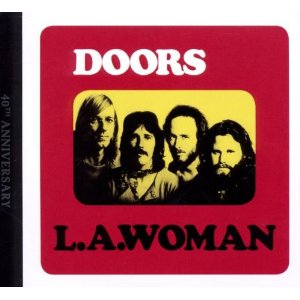 Chinese New Year indicated it was the Year of the Dragon, but apparently that was wrong.  I'm now told it's the Year of the Doors, and we have these two new products to start things off, a slightly-late celebration of the 40th anniversary of the group's last disc, L.A. Woman.  There's also the promise of more goodies to come, but given the multiple releases over the past few years, mostly live concerts, I can't imagine what could be left that's new.  Well, check that.  These are packed with new items, so perhaps there's more of interest to come.

The Doors, Inc., have done a good job of keeping each new generation familiar with the hits.  After listening to this disc, I found myself singing Break On Through in the car, and my two teenagers immediately chimed in.  Neither could remember where they had been introduced to the song, but they sure knew who Jim Morrison was.

L.A. Woman was the final work for Morrison, after the band had already quit touring due to his increased instability, from booze and riotous behaviour.  With his Miami indecency bust hanging over his head, Morrison and the group must have felt that the studio was the only safe place left in the U.S.  Morrison certainly did, as he would leave the band and the country soon after, decamping to Paris as a poet, not a singer.  After some so-so albums, this became a massive hit for the group, a return to form and biographical proof that Morrison could still do it when he needed to.

It was a return to blues for the group, a return to the music they'd started with in clubs, and an opportunity to reign in the singer, and the tendency for the rest of the band to veer towards a Jazz Odyssey piece when left to their own.  That said, it's not the greatest album in the world, a good one for sure, but of all things, there are a couple of basic blues tracks that are little more than filler.  Those are offset by a trio of greats, key moments in the group's catalogue, and plainly major works.  Love Her Madly was a tight, cool single, a Robbie Krieger song that Morrison got into, while L.A. Woman and Riders On The Storm are the best of their epic work, dark but enjoyable tales.  Nobody captured the dangerous side of Los Angeles like Morrison, but somehow he kept the romance in L.A. Woman as well.  His second film noir number, Riders On The Storm, was a serial killer tale that somehow ended up on radio, its melodic nature belying the nasty character behind it.

The secondary numbers are pretty decent too, with The Changeling, Hyacinth House and The WASP (Texas Radio and the Big Beat) all with interesting lyrics.  It's those blues workouts that take the entire album down a notch.  Maybe it's just that we've heard so many blues bands covering John Lee Hooker and basic 12-bar over the years, that the songs have lost the power.

The second disc on the deluxe version is a revelation, almost all the tracks featured in alternative, early versions, complete with studio chatter.  We hear Morrison playfully singing a western number before a take of Riders On The Storm, giving proof to the claim it's inspiration was Ghost Riders In The Sky.  At one point he says there should be thunder sound effects added, which of course became a huge part of the mood of the track.  None of these alternatives were hugely different, and in fact are all pretty close to the final takes, mostly just lacking in energy as the parts were worked out.  The big news is that a previously-unknown Doors original has been discovered on the original tapes as this disc was being prepared.  That's true, and it's called She Smells So Nice, paired here in a live-in-the-studio medley with the Muddy Waters classic Rock Me.  The bad news is that it's a basic blues number, just a work-through to see if it had any potential.  It didn't, and given my lack of interest in the blues numbers that did make the album, I don't have much to praise about this find, so don't fall for any hype over it.  What you should be interested in is the whole album, from early versions to final takes, and if you only have a best-of, with The Big Three on it, Hyacinthe House and The WASP are important cuts to own as well.

Released in tandem with the album is a brand-new DVD documentary, based on the making of the L.A. Woman album.  Mr. Mojo Risin' features almost all the surviving cast, including all three doors, label boss Jac Holzman, manager Bill Siddons, producer Bruce Botnick, and poet-pal Michael McClure.  Of course, it is over-the-top in its praise, with sympathetic votes from DJ Jim Ladd, and critics David Fricke and Ben Fong-Torres of Rolling Stone obvious fans.  But the footage is classic and well-used, and there's some great bits where Botnick uses that Classic Albums trick of taking down the faders you so can hear individual parts highlighted.  Best of all are the bits where members Ray Manzarek, Robby Krieger and John Densmore tell how the cuts came about, the song influences and riff ideas.  Manzarek, as usual, is awfully pompous, but he's a great participant/actor, gleefully playing his keyboard parts and filling in for Morrison on vocals.  Krieger is the humble one, and just as fun to watch perform his solos today.

It's a great one-two punch, having this DVD accompany the reissue of the album.  I heartily recommend getting both for the full experience.
Posted by Bob Mersereau at 5:00 PM