A Moving Tribute To Gene MacLellan 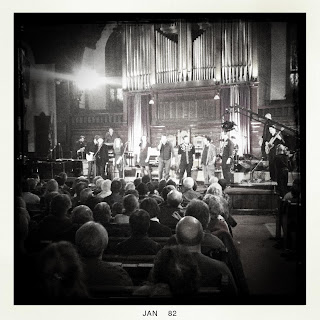 A packed Zion Presbyterian Church in downtown Charlottetown played host to a remarkable tribute concert Saturday night, to PEI's beloved songwriter Gene MacLellan.  In the first-ever large-scale concert in his honour, MacLellan's music was performed and saluted by a cast of some of the very best Island musicians, plus special guests.  The show, called Just Bidin' My Time, was produced by Music PEI, and recorded for broadcast by CBC Radio and TV.

Among the guests and dignitaries were MacLellan's family, including his three children, and all seven grandchildren (plus one on the way).  His daughter Rachel and her two kids came the furthest, flying in from Kingston, Ontario for the event.  "It was time," said his former wife, Judith MacLellan.  "It was a little bittersweet, because this was the church where Gene's funeral was held, and many of the family hadn't been here since.  But I looked over and the grandkids were smiling and laughing, and that made it all special."

MacLellan died in 1995, and his family had long felt a major tribute would be appropriate.  Thanks to much hard work by Music PEI, and friends and admirers of MacLellan, the show became the finale of the year-long celebrations in Charlottetown as one of the Cultural Capitols of Canada.  Also, it was the first event of the annual Music PEI awards week, which will be in full swing on Wednesday.

Taking the stage first was Ron Hynes, the only non-Islander of the night's performers.  Hynes was a friend of MacLellan's, and has long championed his work.  His appearance was a minor miracle of planning and modern medicine, as the beloved Newfoundland songwriter had just returned from a tour of Australia, and had succumbed to a travel bug that left him hoarse and feverish.  The first attempt at MacLellan's Bidin' My Time showed how stressed his voice was, but as this was a show for broadcast, multiple takes for technical reasons were the order of the night.  Reaching deep, Hynes found the strength (and improved range) to nail the song second time through.

TV shows are much different from concerts, with technical perfection the goal, so the audience quickly became used to hearing songs twice, and even started to prefer the re-takes. Of course, part of this was due to the quality of the performers, and MacLellan's material.

Hynes got to make the biggest introduction of the night, reminding the crowd that "the apple doesn't fall far from the tree," and bringing on Catherine MacLellan.  The daughter of Gene has now developed into a national star, including being named Female Artists of the Year at the Canadian Folk Music Awards in 2010.  Comfortable as always in front of an audience (something her father struggled with), she thanked the crowd and Music PEI, and reiterated how much the evening meant to her family.  Then, with the understatement of the night, announced she would play one of her "father's bigger hits," which turned out to be Snowbird.  The iconic East Coast song, as recorded by Anne Murray, became an international hit, and had the world knocking on MacLellan's door, eager for more.  What Anne Of Green Gables has done for PEI's tourism, MacLellan and Snowbird did for the Island's music scene, inspiring generations of musicians there and in Atlantic Canada.

Several of those musicians then took the stage with their own versions of MacLellan favourites, backed by an ace house band. Friend Lennie Gallant, who recalled the time MacLellan made a very rare guest appearance at a concert with him in the '90's, and said "how magical it was", contributed a touching version fo The Call, plus a beautiful duet with Meaghan Blanchard on The Shilo Song.  John Connolly, who also served as musical director of the night, gave a stirring version of Thorn In My Shoe, a country hit in 1970 for MacLellan.  Dennis Ellsworth and Haunted Hearts got the crowd going with the rowdier, country side of Gene's work, and Scott Parsons, who as a kid was befriended and mentored by MacLellan, played what may be the last song MacLellan wrote, Puerta Vallerta.

The biggest number came last.  The whole ensemble crowded the church stage, and led a sing-along and clap-along version of MacLellan's staple, Put Your Hand In The Hand, which was a world-wide hit for the group Ocean in 1970, reaching #2 on the Billboard charts.  Earlier in the evening, MacLellan's manager at the time, Jack McAndrew, told the audience the songwriter had at first demanded the record be pulled from the charts as it became a hit, because the group had changed some of the lyrics.  "He cared about the words," said McAndrew, who at one point was overcome with emotion for his friend, 40 years on.  It's a rare speech that rates a standing ovation at a music event.

The live show had been sold out for weeks, but the rest of the country will soon get a chance to take in the performances.  CBC Radio and CBC.CA will start sharing it in the next few weeks, and the entire TV broadcast will be shown this summer.
Posted by Bob Mersereau at 9:14 AM