MUSIC REVIEW: JAMEY JOHNSON - LIVING FOR A SONG: A TRIBUTE TO HANK COCHRAN 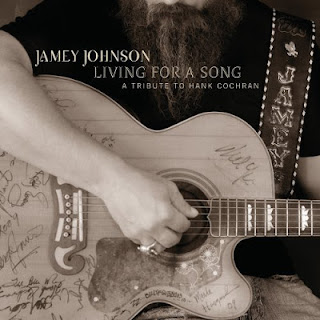 Cochran was a songwriting superstar in Nashville, penning Patsy Cline's I Fall To Pieces and She's Got You, A Little Bitty Tear and It's Just My Funny Way Of Laughin' for Burl Ives, and both Ray Price and Eddie Arnold had huge hits with Make The World Go Away.  That's just some of the dozens of numbers he had go to the charts.  Also, he's the guy who saw a young Willie Nelson perform, and got him a Nashville deal.  Cochran kept writing right up until his death in 2010, with George Strait, Merle Haggard and more benefiting.
Jamey Johnson's had some hits of his own since coming on the Nashville scene in 2005, and written Top 10's for Strait and Trace Adkins as well.  Unlike most Nashvillians, he's kept some of the outlaw spirit around, and prefers old-time to modern country.  He also became great friends to Cochran and was with him when he died.  According to Cochran's widow, the old master loved Johnson and his music.  When Johnson put the word out he was doing this tribute, three generations of Cochran friends and fans asked to be part of it.

Cochran was a master of the country ballad, and many of his best show up here.  Alison Krauss does a sublime Make The World Go Away, and Merle Haggard does justice to I Fall To Pieces.  Of course, Emmylou Harris is a gem for Don't Touch Me, and Elvis Costello is a much, much better country singer these days than when he first attempted the genre back in the 80's, so his duet with Johnson on She'll Be Back is another highlight.

The material is all A-1, including A-11, a classic "don't play that number on the jukebox, it was our song" number, maybe the first of that style.  Cochran took this material seriously his whole career, and according to friend Haggard, wanted to be known as the Hemingway of American country, which he seems to have become.  The only knock on the album is that there are perhaps a few too many of the old-guard outlaws as guests, including Willie, Hag, Leon Russell, Kristofferson, Bobby Bare and Ray Price.  Johnson himself has a similar voice, so it gets a little croaky towards the end, but there's not a one who doesn't deserve to be there.  It's a fine tribute to a giant writer, the Nashville equivalent of a Bacharach or Smokey Robinson.
Posted by Bob Mersereau at 7:35 PM