MUSIC REVIEW OF THE DAY: KYP HARNESS - THE WRONG WAY/CAN A POOR MAN GET A FAIR TRIAL? 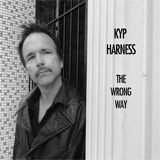 Kyp Harness is the kind of guy you want to follow down the street writing down everything he says, in case he drops a great line he won't be using.  Words and ideas seem to swirl from him, almost fully formed straight from mind to disc.  I'm sure there's some editing and lots of thought put into it, but there's a stream-of-conscious feel to his performance, a sense of immediacy and adventure, and you get the feeling he doesn't quite know where its going but something's going to happen.  You like fine writing?  Kyp's your guy.

It seems the faucet was running full blast lately.  This one is two, two, two albums in one.  It's not just a double; each disc has its own name, and own style.  The first, The Wrong Way, is more of a band album.  Can A Poor Man Get A Fair Trial? is a bunch of acoustic tales; murder ballads, shaggy dog stories, mysteries, all done in the folk tradition.  It's wickedly funny, a little spooky, and captivating straight through.  The band songs are more concise, and sentimental, with more images and poetry.  His way with language always shines through; in Autumn Leaves, he sings "Blow autumn leaves, blow autumn breeze, let your ghostly dance entrance me once again", but it's a song about tears for old friends and memories.  Despite the sadness of life's happenings to some of those people, "there's a summer sun inside, telling me the pleasure's worth the pain."

The first, band disc is recorded in a stripped-down, alt-indie state, with flat drums keeping the rhythm going, and a 60's garage feel on the rockers.  His voice is not his great asset, and like many fine writers, you have to forgive the lack of polish, and instead learn to love the idiosyncrasy of his delivery.  And I'm not sure anyone else could "do" Kyp Harness songs, at least not with the same impact.  His personality, phrasing, language, it's all part of the power of the songs.  I want to quote from every cut here, because I keep discovering lines that make me gasp.  Both these albums deserve repeated, frequent spins.
Posted by Bob Mersereau at 8:50 PM