MUSIC REVIEW OF THE DAY: THE GRAPES OF WRATH - SINGLES 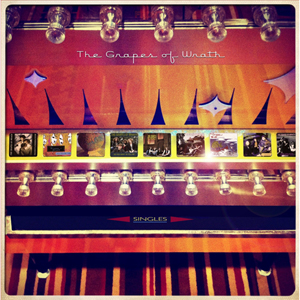 Two pieces of great news here.  First, this isn't just the normal stick-out-a-greatest hits-every-five-years collection.  There's a darn good reason.  The band has reunited, and will release their first album of new music early next year.  The second bit is that there's already new music in the can, and two tracks, both grand, are included here.  Such is the quality, that the appealing and poppy Good To See You (an appropriate return song) leads off the disc, and I had to check to make sure it wasn't one of their hits I couldn't remember from back in the day.

Back when I wrote the Top 100 Canadian Singles, I think I got more complaints that The Grapes weren't included than any other band or artist.  Of course, the jury for the book came close to voting them in, with a couple of songs "bubbling under", in the top 110.  That shows how much their fans love them, and how arbitrary list books are, but you bet they deserve a ton of respect.  Through the 80's and early 90's they released a unchecked string of bright and smart pop tracks, some sweet as could be, some edgy and tough, some acoustic and quiet.  You May Be Right might be my favourite, with its Beatles/Badfinger magic and mystery, the bass upfront, clean and clear, a swirling organ, the guitars slightly gritty, a real gem in total.  There are plenty of memorable ones, on par with that one:  Peace Of Mind, All The Things I Wasn't, I Am Here, but it's the combined clout of the 15 old ones here that proves what a substantial body of work they made.

The earliest numbers, such as Misunderstanding, have a slightly dated feel to them, mid-80's post-punk, anglophile production.  But soon the group had embraced the glory of three minute perfection, the time-honoured beauty of chiming guitars and hook upon hook.  Like fellow B.C.'ers The Odds, they conquered the form, and that's what makes Singles such as joy, if you are indeed a singles fan.  Best of all, Good To See You, shows Kevin Kane and the Hooper brothers, Tom and Chris, still know exactly how to do it.  Welcome back.
Posted by Bob Mersereau at 6:52 PM