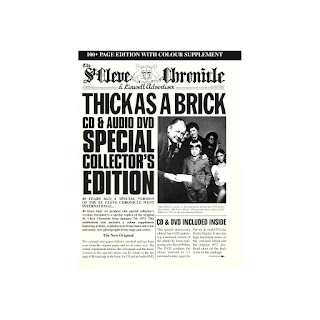 Happy 40th to Tull's most famous, and least understood work.  A huge hit at the time, a number one album, few people got the point that it was a joke, a send-up of concept albums.  Ian Anderson was annoyed by critics calling the previous Aqualung a concept piece, and wasn't too keen on being lumped into the then-hot prog genre in England as well.  So he made this album-long piece to mock both ideas, with his typical humour.  The trouble was, that was missed by folks who loved it, and Tull became one of the biggest draws on the planet.

The thing is, it is pretty good.  Unlike almost all concept discs, and also unlike most lengthy rock pieces, this thing hangs together, largely because it is fun music.  It changes often, has sprightly moments and big rock sounds, interesting lyrics and feels like a trip.  Plus, there's that great newspaper on the cover (now the CD booklet of course) that gave me hours of entertainment as a kid, trying to figure it all out.  True, the disc does start to drift some on the original Side 2, but it all comes back around soon enough.  For my bucks, Side 1 was right up there with anything else in the early 70's, for entertainment.

This anniversary edition is the second such deluxe reissue, following the 25th anniversary one in '97.  This time, it's an audio-visual explosion.  Great work has gone into improving the sound for the latest systems, and creating a gorgeous little box with 100 pages for me to thumb.  There's the basic CD, now remixed, although not drastically.  But the DVD is the thing, with it taken to audiophile bliss with new mixes done in DTS and Surround Sound, a new high-bit stereo mix, and the original mix thrown on for good measure as well.  Crank up the Blu-ray.  While you're listening, you can read along in the reproduction of the classic St. Cleve Chronicle paper, now finally big enough to see without squinting, as previous CD booklets were way too small a font.  Also, there's a huge history of the project in essay form, along with dozens of photos, heck, even the lyrics in German, if one needs them to impress visitors from Bonn.

But I can't give my old anniversary version to my kid, because the bonus tracks on that one aren't featured here, something that frustrates me.  The '97 version had a live 12-minute version from 1978, and a 16-minute interview with Anderson and two others of the band.  These could have easily fit on the 40th reissue, or even something completely different to further spice things up.  As it is, only audio heads are going to get really excited about this release.
Posted by Bob Mersereau at 1:21 PM