MUSIC REVIEW OF THE DAY: THE DO GOOD ASSASSINS - ROME 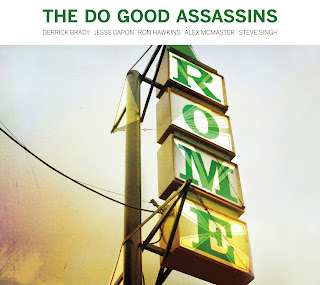 The Do Good Assassins do country, and they do rock, and do both very good indeed.  So good, the group couldn't make a decision on what kind of band it would be, so you get both.  In this unique double-album combo, disc one is the rock one, disc two the country.  I don't like to use "unique" much, because not much truly is, but I'm having a hard time remembering another two-disc album so evenly split between genres.

The Assassins are a new name, but surely most of us know the name Ron Hawkins, the other Ron Hawkins, the man behind Lowest Of The Low.  With a couple of acclaimed solo discs behind him, as well as happily-received reunion gigs with the old band, Hawkins has the bug to be part of a group again.  He sings most of the leads here, as well as writes or co-writes it all, but there's clearly a spark for him being part of a gang.  Neither the rock or country sides are reinventing the wheel, nor do they harken back to Lowest Of The Low much, but its all fun and good and has his usual flair with the words.

The rock side sees the group try on a bunch of hats, mostly tight guitar tunes, from a Stones strut to some pop New Wave stuff, vintage 1979.  With some cool co-vocals from Steve Singh, there's a touch of Squeeze to those ones, with tougher guitars.  Watch out for those great lines:  On Home Sweet Home, Hawkins tells us "It takes a village to raise a child/It takes a city to bury him alive."

The band don't sound as convincing as a country unit, although the songs are just as strong.  It seems more that the country style was placed on them, rather than something that comes naturally.  And it's not really all country, either; Swing Low is a slow, thoughtful number with a cello, for instance.  But one shouldn't quibble with the concept too much when the material is strong.  Little Volcano is a solo songwriter ballad which highlights Hawkins' emotionally intense lyrics, and if it has to be shoe-horned onto a disc called country, so be it.  The Do Good Assassins have several sides, always the mark of a killer band - Ha!  Hope I'm the first to use that pun.
Posted by Bob Mersereau at 2:14 PM