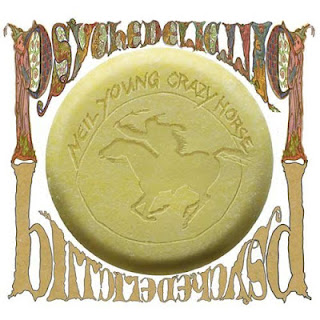 Let's get right to the problem.  It isn't the ridiculous length of some of the songs, clocking in as long as 27 minutes.  Nor is it the endless jams, as Crazy Horse find a groove and sit on it until Neil decides to stop.  What makes this album pretty much pointless is the words.  The lyrics.  They suck.  From start to finish, there isn't a set of words that deserve to be recorded.

Young has said that he released Americana, his disc earlier this year made up of old folk songs, because he didn't have any songs to record with Crazy Horse at first.  Then, as those sessions progressed, this batch appeared to him.  Perhaps he was grasping at straws.  More and more over the last two decades, lyrics have either become less important to him, or his ability to write has diminished.  Greendale was just dumb, no matter how heartfelt.  His songs inspired by his work with the Link-Volt experimental car were barely better.  Even the better albums, such as Prairie Wind, contain ghastly clunkers that no rookie groups would be allowed to get away with.

I'm sure these phrases mean something to him, but too often they just seem to drop out of his conscious and into the mic, without any attempt to better them.  In an attempt to fill up the gaps in the 27-minute Driftin' Back, he attempts to create verses from lines such as "I used to dig Picasso" and "Gonna get a hip hop haircut".  Now, one can argue that lyrics can be improvised as well, but that's all fine and good for a live performance.  If your improvisation is crap, you probably don't release it, you use a better take.  And when he is trying to make what would be considered a basic verse-chorus-verse song, such as Twisted Road, he's again got nothing to say:  "Walkin with the Devil on a twisted road/Listenin to The Dead on the radio".  In an attempt to explain the songs, Young has placed a brief, one-line note before the lyrics in the booklet.  In the case of Twisted Road, he writes "Somewhere ahead, your friends reach out with their memories."  That's a pretty big concept for a lyric that's so banal.  He should actually try to write something that lives up to that concept.

The reason I'm focusing on the words so much is that I really, really want Young to deliver a good album.  I know he doesn't care, or at least claims he doesn't, but I'm writing more as a fan than a critic.  I like hearing the Horse with him, especially the nifty harmonies and gang vocals they now use.  The one song I think comes closest to a solid work, She's Always Dancing, takes me back to the magic of Like A Hurricane or Cortez the Killer, lengthy story-songs that brought us into a mysterious dream-state.  I don't think Young is far off from these heady days at any time.  I just think he needs to try harder, stop with the foolish hard-headed, stubborn, and, to be blunt, childish habits he's developed, and work a little for his art.
Posted by Bob Mersereau at 7:28 PM