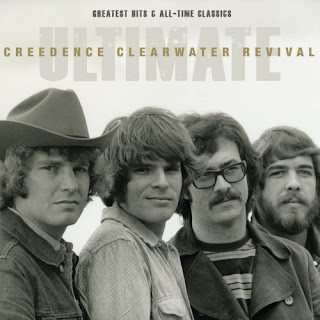 It's pretty telling when even the liner notes admit there have been way too many CCR hits packages.  I have no good way to count them, but every base has been covered:  greatest hits, best of, box sets, deluxe ones, cheap ones, packaged in cheesy tin boxes, TV-only collections, best of John Fogerty (featuring live versions of CCR numbers), and every one of them including the same dozen or so hits.

Ah, but what hits they are:  Down On The Corner, Fortunate Son, Travelin' Band, Lodi, Who'll Stop The Rain, everything from giddy celebrations of rock n' roll and youth, to sharp social and political
criticism, all in the Top 40 in about a three-year stretch.  Those same liner notes try to clumsily make a comparison between CCR and The Beatles.  But that's just silly.  Instead, how about seeing Fogerty as the white Marvin Gaye or Curtis Mayfield of the day, making great grooves while using the platform to speak out and be counted.

At least they did try to make this set different.  It's a well-priced, three-disc collection.  The first two take a novel approach, mixing all the hits with the deep cuts from the Creedence albums.  For the most part, only the baby boomers know the full albums such as Willy and the Poor Boys and Cosmo's Factory.  Everyone since has been brought up on the  greatest hits albums.  So rarely-heard numbers are here:  Wrote A Song For Everyone, Commotion, Pagan Baby.  The trouble is, the quality varies.  Fogarty was pushing head-long at a time when record companies still demanded as much as possible, two or three albums a year.  There's a big drop-off between the A and B material.

What truly makes this a different collection though, is disc three.  It's all live, all from the heyday, and proves what a potent concert act they were.  The other three members weren't place holders on stage, and this was a well-oiled machine that could crank it up.  Fogarty, then as now, was a great front man, thrilled to sing you the tales, and he and his brother Tom were a mean guitar duo.  To make this mini-concert, the compilers have pulled tracks from a number of sources.  Sadly, all of them were previously released, but in packages most won't own.  There are several of the bonus tracks from the 40th anniversary reissues of the original discs, as well as a few from the often out-of-print The Concert album.  Whoever made the mix of these tracks did a great job, as it flows really well, and seems like it could be one great night.  It does bug me that no unreleased live material was sourced out, or allowed by the powers-that-be.  You know it's out there being held back for another time, as a further incentive to buy the same hits again.
Posted by Bob Mersereau at 9:08 PM