MUSIC REVIEW OF THE DAY: THE SCENICS - DEAD MAN WALKS DOWN BAYVIEW 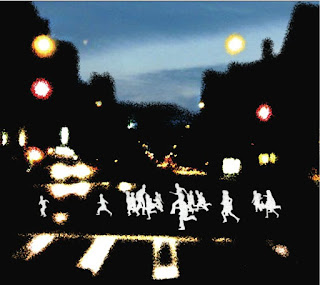 The nice thing about not having released a new album in over three decades is that there are few expectations.  The Scenics can do anything they want, and do on this new album.  There's lots of everything but normal here, lots of interesting and experimental sounds that place them in their late-70's Toronto punk scene roots, but expand that with lots more inventive approaches.

The Scenics were pretty unheralded back in their first incarnation, and split up in '82 with one album behind them.  But fast-forward to the 2000's, and leader Andy Meyers started digging through the vaults, discovering hours of cool material.  A live album, called How Does It Feel To Be Loved came out in 2008, all covers of classic Velvet Underground songs, that made lots of waves and renewed interest in the group.  Then Meyers brought out Sunshine World, unreleased late 70's tracks, and it proved that people had missed out on the group back then.  Now reformed, the group has been doing live shows, and now comes this new one.

From sweet and soft to loud and snotty, The Scenics run the gamut of the real alternative music.  No Sleep is original punk, a crazed cross between a lost rockabilly classic and a car crash, Meyers and co-guitarist Ken Badger doing very nasty things on six strings.  They sound like that guitar solo Marty McFly tried in Back To The Future.  But Growing Pains is has a gentle touch, a crooning vocal yet ragged edges.  It's a hymn for the street underdog.  The two guitarists play a mix of skewed and beautiful sounds throughout, often one noisy and the other jangly, and it's oddly comforting mix, a controlled out-of-control sound if you get my drift.

Occasional pop moments spring up in the songs, little bits of harmonies or nice changes, but never enough to let a song become easily digested.  I mean that in a good way of course, as following the deviant plot points is a big part of the fun here.  So is the somewhat surrealistic poetry in most of the songs, strange trips to somewhere, like in Miami, where "This city is the biggest thrill/I don't understand you."  Obviously, this is going to appeal to those fans of The Velvets and Television, but luckily for The Scenics, there are a lot more of them around now then there were back in the late 70's.
Posted by Bob Mersereau at 7:25 PM