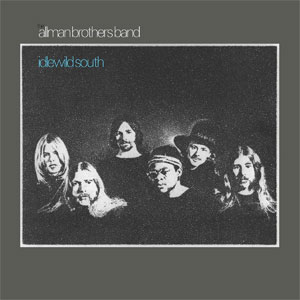 Idlewild South was the Allman Brothers' band cabin in the woods in Georgia, a place where they would hang, jam and party while they were still trying to break through. They named their second album after it, because it meant so much to them, as the spiritual home where their extraordinary family bond was created. It included wives and girlfriends, roadies and pals, and they were all united in making this group succeed.


By 1970, the Allmans already had a strong reputation from those in the know, but their self-titled debut had fizzled. This was despite constant playing, and they had started to develop a word-of-mouth following from town to town. All that playing had another benefit, as the blues jams and soulful classics were rubbing off on the songwriters. Their second album would have those strengths, plus Atlantic Record's regal producer Tom Dowd was suitably impressed with the group, and made himself available.


Idlewild is home to two of the group's acknowledged classics, Greg Allman's Midnight Rider, and Dickey Betts' In Memory of Elizabeth Reed. The rest of the cuts, including the underrated Revival, are all solid blues-rock numbers, each one showcasing one or more of the strengths they had built up. Greg's vocals could lead a track into soulful territory, Duane's slide would make it soar, Betts could match on lead guitar, the double-drums found new rhythmic territory and Berry Oakley's bass was the ultimate anchor.


As well, there was an intensity to the blues here that hasn't been matched since. Willie Dixon's Hootchie Coochie Man had all the fire of a full-out rock performance, with sizzling solos and madcap drums, but with complete reverence to the source. And don't go looking for Southern rock, jam band music, whatever came later. This stuff was miles different and unique, it stands alone from the genres that they pretty much created, and moved into following the deaths of Oakley and Duane Allman.


The key to the recording was that the band was so well-rehearsed, they just simply took their live show into the studio. There are virtually no overdubs, as Dowd let them record as a band until they got the best one. The album did give them some of the desired results; it broke into the Top 40, and sold enough to keep them on the road, continuing to build the reputation. They finally figured out what to do shortly after, and recorded the legendary At Fillmore East album, which made them big stars, and is still considered their ultimate work, and one of the very best live albums ever.


This deluxe edition includes three outtakes from the album sessions, including a previously-unreleased version of Midnight Rider, not radically different but enough that it's intriguing, including an acoustic slide opening bit from Duane. The rest of the double-CD is made up of the previously-issued Live at Ludlow Garage 1970 show, which came out ages ago, and probably not in most collections. The bonus there is the inclusion of Elizabeth Reed from that show, not on the original release. The bad part is that it still includes Mountain Jam, in all its 45-minute glory. That was only acceptable for a brief period in 1970, and is about the only thing from this band that has not aged well.
Posted by Bob Mersereau at 5:16 PM