MUSIC REVIEW OF THE DAY: MR. DYNAMITE - THE RISE OF JAMES BROWN 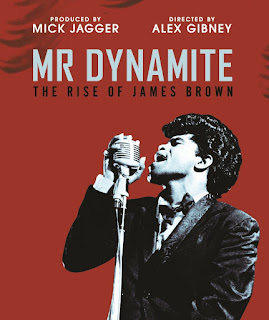 The holidays are the perfect time to sit back with a movie, and I know a lot of music fans who reserve some time for the first-rate artist documentaries and biopics that have been made of late. I'm hearing lots of good things about Amy, the Winehouse documentary, and Love and Mercy, about Brian Wilson. I set aside time to watch this doc, producer by superfan Mick Jagger, about the phenomenal career of James Brown.


A Peabody Award-winner, this is an example of everything done right in two hours. It explains things, even the most complicated musical concepts, which Brown and his great bands invented; funk, and the rhythm emphasis called 'The One'. It shows his social power among the black community in the '60's and '70's. We realize how he earned his famous nicknames, Soul Brother #1 and The Hardest-Working Man In Show Business. This wasn't hype, this was the result of a drive that unstoppable. Cutting his processed hair was a completely political move that had implications across the country, black pride. His songs could ignite as well; Say It Loud - I'm Black and I'm Proud sent the message coast to coast.


Praise is spread around to the other important people in the bands, the massive talents such as Maceo Parker, Fred Wesley, Pee Wee Ellis, Clyde Stubblefield, Bootsy and Catfish Collins and more. The people who knew him best, his loyal lieutenants such as Bobby Byrd, MC Danny Ray (the cape handler), and Rev. Al Sharpton tell us what was on his mind. Modern musicians Chuck D and ?uestlove help explain his importance, how he's always been all over hip-hop.


Brown's many downsides are here as well, including his abuse of women, his ridiculous treatment of his bands, his bad moves in politics, supporting Nixon being the most obvious. But anyone who doesn't understand his legacy, both musical and social, who sees him as a cliche only from his final decade or some Saturday Night Live skit, can watch this and know two hours later why he was The One.
Posted by Bob Mersereau at 8:52 PM