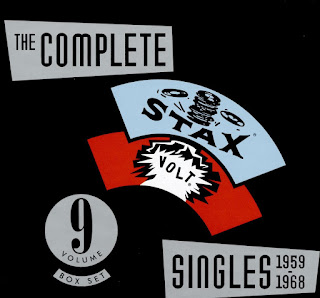 Too hard to find for years, finally reissued, this 1991 compilation has to be in the top ten all-time of box sets. It has everything. There are nine CD's, each one over 70 minutes, stuffed with 244 tracks. There's an incredible booklet, written by Grammy Award-winner Rob Bowman from Toronto (he won for Vol. 3 of this series). It's comprehensive, as it features every A-side of every single released by the company during these years, as well as several important B-sides. And, it's simply awesome musically.


You'll know the big names of course: Otis Redding, Sam & Dave, Booker T. & the MG's. If you're a southern soul fan, you'll know some of the secondary acts, or some of their hits: Eddie "Knock On Wood" Floyd, Carla "Gee Whiz" Thomas. If you're a collector, this just knocks your socks off. The brilliant Mable John, once a Raelette with Ray Charles, is featured with her best-known cut, Your Good Thing (Is about to end), but it gets better and better over the collection, with one rich vocal after another. The second-line hits, barely remembered now and never played on radio, pack just as powerful a punch. Floyd's Big Bird is dramatic, killer. Carla Thomas made several appearances on the charts, but it's shocking she didn't have more top hits.


Then there's her dad, Rufus. Often thought of as the clown prince of the label, a disc jockey with a string of early hits based on the dance the Dog, shows his funky grooves each time out, with The Memphis Train maybe the best, without a gimmick in it. One-hit vocal groups the Mad Lads, The Astors and Jeanne & the Darlings prove to be rich in material. Then there are the one-time-only appearances, such as the Four Shells, cuts that can often prove to be great discoveries. Check out their Hot Dog on YouTube.


The story of the label has been well-documented, especially by Bowman in his exhaustive notes and companion book, Soulsville U.S.A. - The Story of Stax Records, a must-read. So it's no secret how this great music happened, an incredible only-in-Memphis blend of white and black, rhythm 'n' blues and country, tremendous musical talent, everyone in the right place at the right time. The players, producers and writers were key, the same as at Motown, only they were better-known than their Detroit competitors, because they were mostly recording artists too: Steve Cropper, Duck Dunn, Booker T., Al Jackson, Isaac Hayes and Dave Porter are responsible for most of the cuts, in some way, which explains the consistent high level of quality from start to finish.


The finish of this set, the first of three boxes, comes at the end of the label's golden era. First, Redding was killed in a plane crash as he was about to become a huge star to white audiences. Then, the label's fruitful partnership with Atlantic Records collapsed, and the owners discovered they'd been screwed by the New Yorkers, who had managed to get them to sign a contract giving Atlantic the rights to all the classic records, forever. There's much more to the story, which is why I also recommend Bowman's book, but in the meantime, there's lots to learn in the notes here, and of course, one of the great collections of the '60's or any other time.
Posted by Bob Mersereau at 11:42 PM