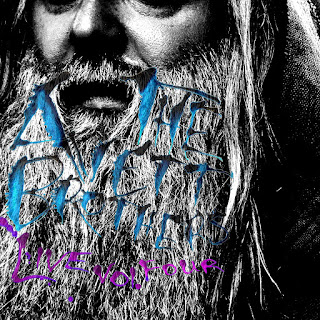 The Avett Brothers always put on a show, and for New Years Eve 2014, there had to something extra for fans. So the group invited a special guest: Father Time himself. We see the old dude in a series of vignettes, wandering around outside the venue, checking out an amusement park, getting hammered in the hotel bar. Finally, he joins the group for the traditional countdown, a little on-stage partying, and then taking lead vocals on a ragged but celebratory The Boys Are Back In Town. And, we get to see it all on DVD.


Or listen on CD, which is kind of weird, as they keep the dialogue and Father Time scenes, a visual experience. In fact, I'd argue that The Avett Brothers are always more of a visual experience, a great group party best observed with a sold-out crowd than heard on your own. They do everything big, even the ballads, turning the quiet lines into mass sing-alongs, especially the once-thoughtful I and Love and You.


Each year, the band gets bigger, and now features seven members, all plucking and sawing away. So even though they are still ostensibly an acoustic band, with banjo and fiddle and cello, you're talking about a great big acoustic Wall of Sound, powered by a rapturous crowd ready to cheer every light cue and on-stage fist pump. I think most fans enjoy the theatrics, but I worry that the nuances of songs such as Kick Drum Heart are being buried in the excitement, the bigger, the louder. Or, maybe I should just give it up and party.
Posted by Bob Mersereau at 8:14 PM