MUSIC REVIEW OF THE DAY: THE TOWN HEROES - PLEASE, EVERYONE 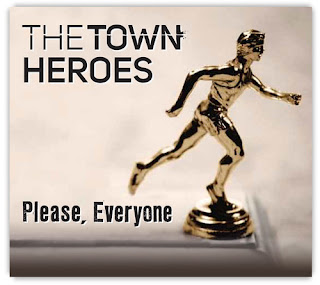 Sheesh, I'm still getting caught up on my pre-Christmas releases that piled up in the blitz. I've been listening to the new Town Heroes set for weeks, but I'm just now getting around to putting thoughts down, so if you haven't grabbed it yet, hopefully this will catch your interest.


As always, our Heroes give us more sounds and energy than should be humanly possible from just a duo. But while they can make a mighty noise with crushing riffs and nuclear drums, the songs are cleverly, sneakily about a lot more than volume and fun. Of course, if that's what you're looking for, there's plenty of that in store too, don't get me wrong. Just consider the other stuff.


First off, the new album just drips with beautiful melodies, every song as tuneful as can be. Then there's Mike Ryan's aching vocals, sung almost completely in falsetto, with a particularly sad and thoughtful manner. That's because the topics are pretty heavy, from the personal to great big world-wide issues. The title cut spells it out, a call to look at the great big mess it all is: "Please, everyone, what have done?" Ryan doesn't point finger at everybody else though, admitting his own failures readily in the cut Baton Rouge: "The only way I've ever learned was through fucking up and getting burned."


With all this melancholy going on, you expect some down numbers, and there are a couple, including the album closer, Soldiers. Really though, the band has mastered the technique of putting a lot of substance into some very energetic, accessible and enjoyable music. It's a perfect night out for everybody then, The Town Heroes make you party, and make you think.
Posted by Bob Mersereau at 2:17 PM