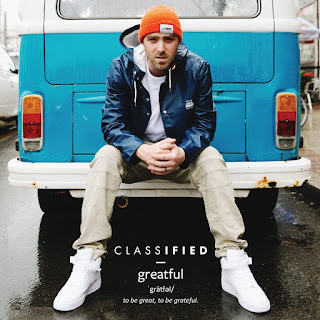 The insanely catchy single from the new album by Halifax (er, Enfield) favourite Classified, No Pressure, features a classic guest spot from Snoop Dogg, who happened to be in town last summer shooting a Trailer Park Boys episode. Snoop admits he doesn't really know where he is, some place in Nova Scotia. It's a fun moment in a great song, and a good celeb cameo.


Thing is, musically Classified certainly doesn't need any help from outside, he's still doing just great in his hometown, delivering another set of rich, superior productions, smart lyrics and strong tunes for album 15. And when he wants collaborators, he always has a great list of friends from right in town. David Myles is back after the massive success of Inner Ninja from the last album, joining on the cut Work Away, about flying across the country for jobs. Myles also helped write a couple more, and shows up on horns, guitar and piano too. Another frequent collaborator, Ria Mae helps with some writing and lots of singing, plus there's Josh Van Tassel drumming on one, Classified's brother Mike Boyd doing lots, and tons of real strings, courtesy of Drew Jurecka. That's the thing with these cuts, you're getting musical value for your money on each track, as they are all brimming with sounds and ideas.


On the rap side, the honesty and maturity of Classified's rhymes can be startling and inspiring. Whether he's talking about being a father, a husband, a community member or a performer, he comes at it from a sold moral centre. Snoop Dogg should have learned a little more about where he was, and perhaps picked up a lesson about respect for women while he was at it, that's just one of the themes here.
Posted by Bob Mersereau at 12:07 AM